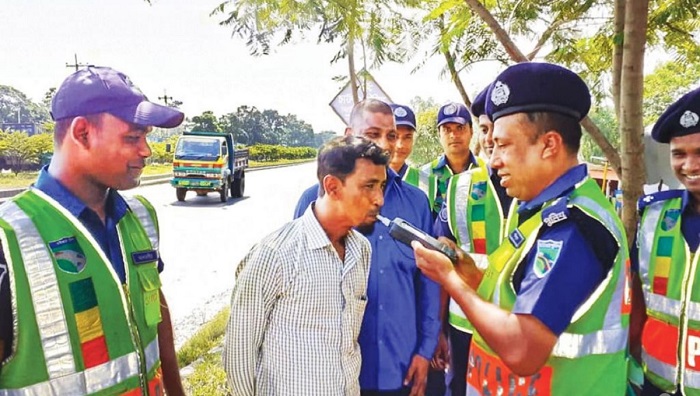 The Highway police has started a drive with a new device to law enforcement in the country to prevent drunken driving.

The drive is being conducted along with an alcohol detector at various spots at Sitakunda Mirsari of Dhaka-Chattogram highway from October 12.

A Highway police official informed that they have started the drive for the first time with the alcohol detector which can detect whether a person is drunk within four seconds just by taking a sample of the driver’s breath.

The breathalyser (a portmanteau of breath and analyser) is a device for estimating blood alcohol content (BAC) from a breath sample.

The device imported from China has been provided to the Highway police throughout the country to examine the drivers’ level of alcohol intake if at all while driving buses and heavy vehicles across long distances.

On Sunday morning, the Highway police conducted the drive with the machine at Baro Aulia of Sitakunda and Sonapahar of Mirsarai areas on the Dhaka-Chattogram highway.

Abdul Awal, OC of Baro Aulia police station, told media that “We have started examining the drivers from October 12. Many drivers have already become aware after hearing about the drive. During the first day of the drive, despite detecting traces of alcohol or drugs, we just released them after issuing a warning not to drive in such state.”