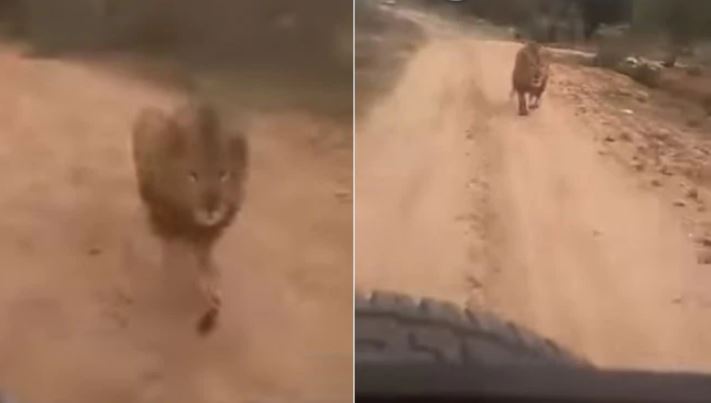 A group of tourists were chased by a lion while on a safari to a zoological park in Karnataka of India.

The incident, which occurred inside the Atal Bihari Vajpayee Zoological Park in Ballari in late August, was captured on camera.

The scary video has gone viral online after it emerged on social media on Friday.

In the one-minute-long video, six-year-old lion, Keshri, is seen furiously running behind the safari jeep. The lion continues to chase the vehicle until it manages to speed up and move ahead. It appears as though the video was filmed by one of the tourists inside the safari vehicle.

Nobody was injured in the incident.

Since it was posted to YouTube on Friday, the video has collected over 4 lakh views and a ton of comments. It has also been shared widely on other social media platforms like Twitter and Facebook, where many have commented to express how scary the incident looks.

Ballari zoo Executive Director Sonal Varshi termed the incident a "non-event" that occurred more than 45 days ago while talking to news agency IANS. She said that "nothing untoward" happened and "chase by lions and tigers in their territory is common."

"The lion got worked up when the driver took the jeep closer to it and raised the throttle, which provoked it to charge and chase it at top speed," the 2011 batch Indian Forest Service (IFS) officer said.

"Keshri was a new entrant in the zoo and was released in the protected area to settle down. It has accustomed to vehicles and visitors now," Ms Varshi added.

In a similar incident in November last year, a tigress in the Tadoba-Andhari Tiger Reserve in Maharashtra was filmed chasing a tourist vehicle. After the incident, officials had asked tourist guides and safari drivers to maintain a minimum 50-metre distance from the felines in the forest.