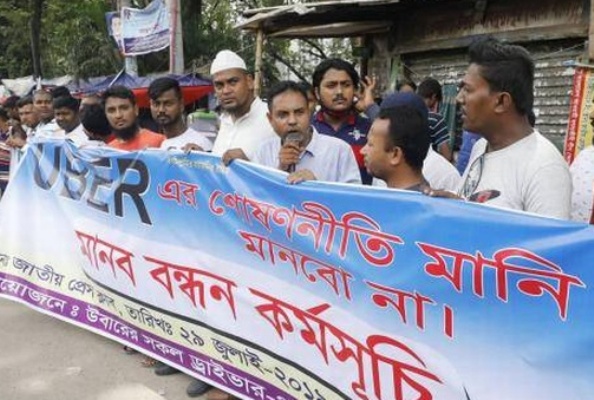 Two groups of Uber drivers on Monday went on a 24-hour work strike from 12midnight to press home their eight-point charter of demand.

1. Fixing fare per kilometre and minute from start to end of every trip.

3. Raising fare due to a hike in gas prices.

4. Arranging trips near destinations under the ‘Destination’ option in the app.

5. Ensuring security of the drivers. Arranging compensation if passengers cause damage to vehicles.

6. Taking no action against the drivers without investigating passenger complaints.

7. Making it compulsory for passengers to provide own image in their Uber accounts.

8. Arranging initial training for passengers on location. Putting a ceiling of two kilometres on maximum distance between the drivers and passengers.

Belal Ahmed, General Secretary of Dhaka Ridesharing Drivers Union, said that out of 10,000 cars active on Uber, at least 7,000 drivers had joined the strike to press home their eight-point demand.

“We had discussed the issues several times but there has been no solutions forthcoming,” he added.