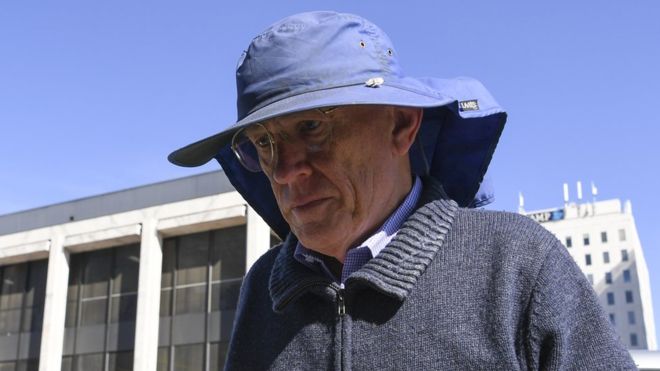 A man who was wrongfully jailed for 19 years over the murder of a senior Australian policeman has received A$7m (£3.7m; $4.8m) in compensation.

He was later freed after a court ruled he had had an unfair trial. He was acquitted in a second trial last year.

His killing rocked the legal and political establishment and sparked one of the nation's largest-ever criminal investigations.

In earlier hearings, the ACT Supreme Court heard that Mr Eastman had lost the opportunity to have a family and a career because of his imprisonment. His mother and two younger siblings had also died during that time.

"He has lost a significant chunk of his life," his lawyer, Sam Tierney, said outside the ACT Supreme Court on Monday.

Mr Winchester was shot twice in the head outside his family home in Canberra, the nation's capital. He remains the most senior police officer to have been murdered in Australia.

Mr Eastman, then a public servant, was identified early on as a suspect because he had allegedly sent threats to police over the handling of an earlier criminal matter.

But he successfully argued to be released in 2014 after a judicial inquiry ruled that he had suffered a "substantial miscarriage of justice" due to flaws in police evidence that was used at his trial.