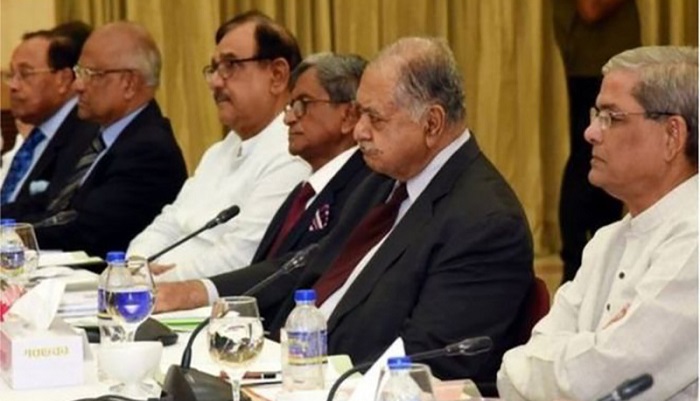 Describing Sheikh Hasina as a ‘self-proclaimed’ Prime Minister, not an elected one, the JOF chief claimed that he himself would testify that no one elected her.

“You (Hasina) are a dramatist, not a leader. You thanked people on December 30 (last year) for electing you for five years. You’re a self-proclaimed Prime Minister. No one elected you for the third term. I myself will testify that no one elected you,” Dr Kamal said.

The veteran politician came up with this call while speaking a discussion programme arranged by JOF at the Jatiya Press Club protesting the killing of BUET student Abrar Fahad.

Dr Kamal further said, “How long will you go on the wrong path with lies? Try to understand the bad consequences of such lies, and keep cool to free the country from misrule before time runs out fast.”

Dr Kamal, also the President of Gano Forum, said the current government can stay in power for the time being by resorting to repressive acts. “But you won’t be spared for such acts. So, step aside as early as possible in a decent way and announce to hold a new election.”

Reiterating that people are the owners of the country as per the constitution, he said they will decide which party should be there in power through a fair and credible election under the neutral Election Commission.

The Oikya Front chief also criticised the government for not giving opposition parties the permission to hold rallies and meetings.

He said the constitution gives the political parties the right to hold rallies and express their opinion. “Those who are depriving people of exercising such right and obstructing rallies are committing treason, and the punishment for sedition will be a severe one.”

Dr Kamal warned that they will make a list of those violating people’s rights and put them on trial when their alliance is voted to power.

About the killing of Abrar, he said the government is turning the country’s boys into “killers and beast. Why’re you making our sons animals? The boys of this Bengal had fought for the liberation and waged a movement against autocrats, as they’re brave. Now you’re turning them into animals and you’ll have to face trial for it.”

The Oikya Front leader also said, “Whose ideals the killers of Abrar are following? Is it the ideal of that one who’s governing the country? If this is the case, then you shouldn’t be there in power for a moment.”

He also said the killing of Abrar for exercising his freedom of expression is an attack on the Constitution.

The Gano Forum President regretted that the current government is dishonouring Bangabandhu and the four national leaders by indulging in misdeeds staying in power using Awami League’s name.

He also demanded the release of BNP chairperson Khaleda Zia from jail. “Khaleda Zia’s health condition has worsened, and everybody is voicing concern over her life and survival. It’s unimaginable that the opposition leader and the three-time former Prime Minister won’t be released and provided treatment even after her illness.”

Speaking at the programme, Nagorik Oikya Convener Mahmudur Rahman Manna said they will hold a ‘mourning rally’ in any open space in the city on October 18 protesting the murder of Abrar.

He called upon the people of all walks of to make their programme success with their spontaneous participation in it.

After the meeting, several hundred leaders and activists of Oikya Front, led by Dr Kamal, took out the rally wearing black badges and holding black flags from the Jatiya Press Club area towards the Central Shaheed Minar.

However, police foiled the rally brought out by the alliance protesting the killing of Abrar Fahad.