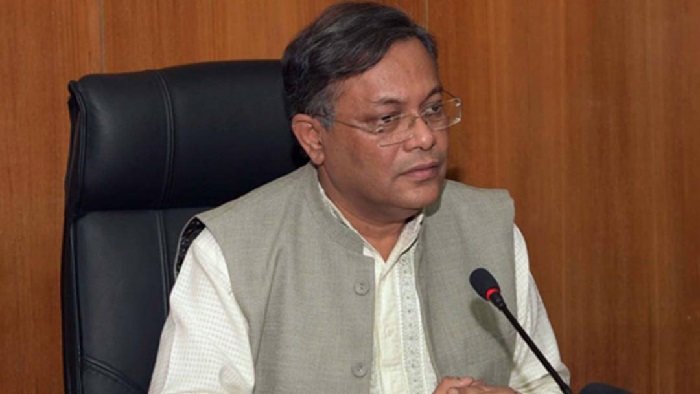 Information Minister Dr Hasan Mahmud on Sunday urged the students, staging protests over the killing of Abrar Fahad at BUET to be more careful so that none could create unrest in the country capitalising on the issue.

“Bangladesh Nationalist Party (BNP) and its allies are plotting to create unrest in the country capitalising on the student protests in Bangladesh University of Engineering and Technology (BUET),” he said at a press briefing at his ministry office.

He questioned why the BUET students are still in protest although their demands have already been accepted.

The Chattra Dal, student wing of the BNP and Chattra Shibir, student wing of Jammat Islami Bangladesh, have got connected with the movement in disguise of the student protest, the minister suspected.

“Abrar murder is undoubtedly a brutal and condemnable incident …I myself fully support the demonstrations by the students,” he said, adding: “Why they are still in protest when the BUET authority has accepted all of their demands.”

Dr Hasan said BNP has allegedly pushed its agents into the student protest. “The Chattra Shibir had designed two times to kill me,” he added.

On the student protest at BUET, the Information Minister said, “From the very beginning, we protested Abrar killing and the government took steps against the offenders before raising any demand to this end.”

Police arrested a total of 10 persons in connection with the incident before filing a case in this regard, the minister said, adding that 19 persons have been arrested so far by the police.

Abrar Fahad, a second-year student of Electric and Electronic Engineering was bludgeoned with blunt objects by a group of students in the early hours of last Monday and then police recovered his body from the stairway of Sher-e Bangla Hall of BUET.

Referring to killing of female student Sabekun Nahar Sony in BUET during the BNP regime in 2002, the minister said the police at that time helped the alleged “killers” to escape from the scene.

Sony was killed in a gun battle over tender between two rival groups of Jatiyatabadi Chhatra Dal.

Criticizing the then BNP government, the information minister said a student was murdered at Mohsin Hall in the University of Dhaka and then the body was kept inside a water tank, adding that even the students at that time had to drink water from that water tank.

Dr Mahmud told the reporters that Dhaka University student Chunnu was also murdered during the regime of the BNP, but the government didn’t take any action against the killing.

Ruling out the students’ demand to ban student politics in the country, Dr Hasan Mahmud said, “It is totally absurd as the students played vital roles in different movements starting from the War of Liberation”.

Bitterly criticizing the role of the BNP over the recent agreements signed between Bangladesh and India, he said the BNP is spreading “confusion” on the matter as the agreements signed during the recent visit of Prime Minister Sheikh Hasina to India protect the interest of the country.

The minister said, “We have a good bilateral relation with India and we will be financially benefitted if India uses our Chattagram and Mongla ports”.

Talking on the health issue of BNP chief, Dr Hasan said, “It is not new. She has been provided with treatment by the highest medical institute in Bangladesh -Bangabandhu Sheikh Mujib Medical University (BSMMU).”

The minister also was disagreed on the allegation made by BNP leader Ruhul Kabir Rijvi over the present medical facilities being enjoyed by BNP chief Begum Zia.