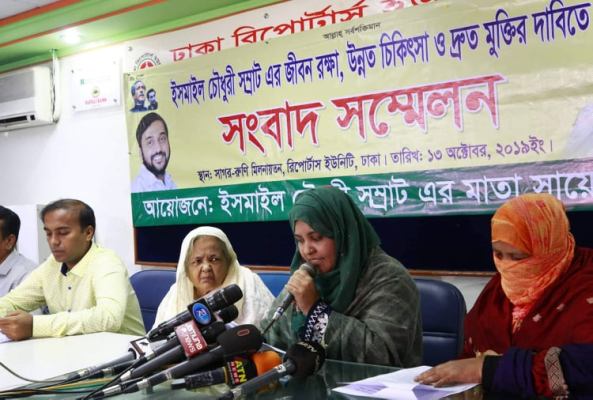 “My son is innocent. He is very sick. Please have mercy and release him and arrange better treatment for him,’’ Sayera Khatun said at a press conference at Dhaka Reporters’ Unity in the capital.

“My son is a victim of a ‘plot.’ Arms and drugs recovered from his Kakrail office were planted as part of a ‘staged drama,” his mother said.

Samrat’s mother also addressed Prime Minister Sheikh Hasina in her written statement. To the PM she said “Samrat is your worker. He is like your son. As a mother, I am requesting you to forgive his faults and mistakes and release him. Arrange better treatment for him and save him.”

“He is an ideal soldier of the Father of the Nation. He has worked for Awami League for a long time,” she further said and gave detailed accounts of Samrat’s party involvement.

Samrat’s family briefed the media on Sunday following his arrest on October 6 over his alleged links to illegal casino business in the capital.

According to Rab sources, the elite force recovered a foreign pistol, 1,160 Yaba tablets, 19 bottles of foreign liquor, two hides of kangaroo and 'electrical equipment' that was used for torturing people.

A mobile court sentenced Samrat with six months’ imprisonment for possessing skins of kangaroo under Wild Animal Protection Act and was later sent to Dhaka Central Jail at Keraniganj.

Two cases were also filed against him under Narcotics Control Act and Arms Act with Ramna police.

However, a police plea for granting 20-day remand for grilling Samrat in the cases filed against him was stayed after he was hospitalised with chest pain. On Saturday, he was sent back to jail after his release from hospital.