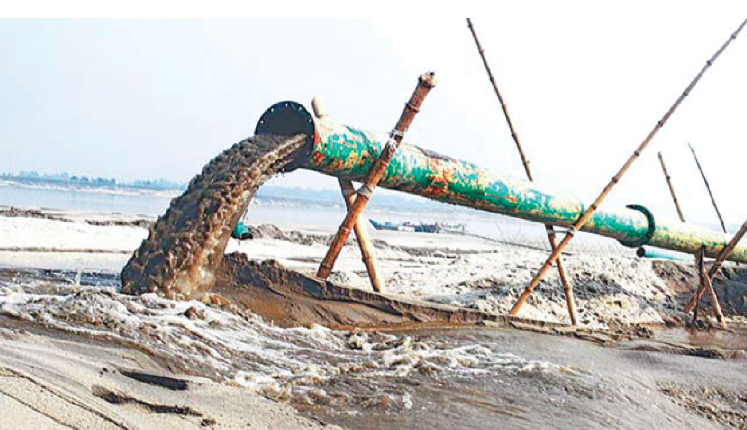 Illegal sand extraction from the Meghna River in Sonargaon upazila is going on unabated, posing erosion threat to vast tracks of cropland, adjacent villages and century old traditional Anandabazar Haat along the river.

Different villages including Maligaon, Haria, Gobindi Haria, Sonaimui and Boidayapara along the riverbanks and a vast track of croplands are facing a great threat  erosion, said locals.

During a recent visit to the area, the UNB correspondent found sand is being extracted from Sonamui, Anandabazar and Aman Economic Zone are with 20-30 strong dredgers.

Some 20-25 bulkheads were also kept for taking sand and ‘sand terrorists’ with sticks were seen guarding the spots.

Local alleged that a syndicate of sand lifters with the help of local influentials are extracting sand from Anandabazar area in the upazila using 8-10 dredgers, endangering the adjacent century old Anandabazar Haat.

Talking to the UNB correspondent, some traders of the haat said it will be very difficult for them to sell their bamboos if the haat is devoured by the river as it is the lone place where they can easily bring their bamboo poles for selling.

Some local people, wishing anonymity, alleged that a syndicate led by Ismail Hossain Member and his son Roky, an alleged drug peddler, are controlling the sand business in the area.

Besides, 20 dwelling houses in Nunertek area of the upazila went into the gorge of the river due to erosion caused by illegal sand lifting.

Over 100 families, six educational and religious institutions at Raghunachar, Gucchagram, Sabujbag and its adjacent areas are facing threat of river erosion, said locals.

They also alleged that local administration remains silent about the illegal activities of the sand lifters.

Anjan Kumar Sarkar, Sonargaon Upazila Nirbahi Officer, said “We are investigating the allegations and action will be taken against those involved in illegal  sand extraction.”