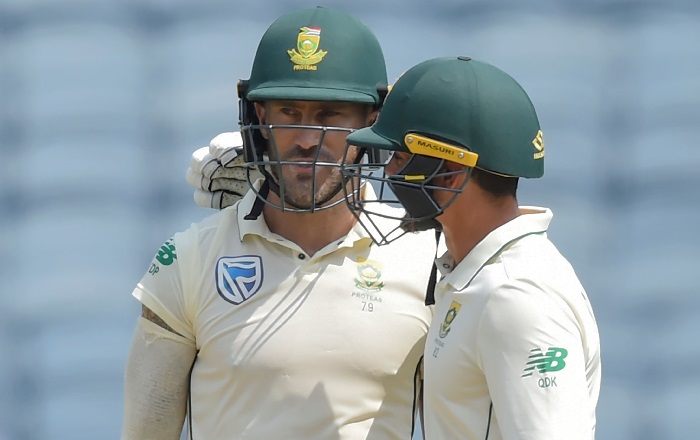 South Africa captain Faf Du Plessis hit a battling half century but could not stop a steady stream of wickets falling to India on day three of the second Test on Saturday.

The Proteas were 136 for six at lunch in response to India's 601-5 declared, with Du Plessis on 52 and Senuran Muthusamy on six. They need another 266 runs to avoid the follow on.

South Africa resumed on 36-3 and Indian paceman Mohammed Shami struck early to remove nightwatchman Anrich Nortje for three when the batsman edged a delivery to Virat Kohli at fourth slip.

Theunis de Bruyn was caught behind off Umesh Yadav for 30 as the tourists slipped to 53 for five.

Wicketkeeper-batsman Quinton de Kock put on a 75-run fourth wicket stand with du Plessis to offer some resistance to the Indian bowling before Ravichandran Ashwin's off spin bowled him for 31 with.

Kohli hit a career-best 254 not out as he surpassed Don Bradman's Test tally of 6,996 runs on Friday to consolidate India's stronghold after they elected to bat first.

A victory for India, who won the first of the three Tests on Sunday, will see them beat the record of 10 straight home series wins they share with Australia.