No admission test in BUET before fulfilling 5-point demand 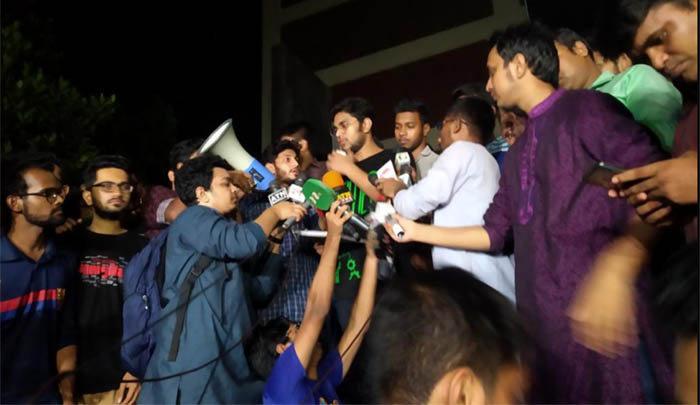 Considering the admission test, the protesting students of the Bangladesh University of Engineering and Technology (BUET) had lowered their 10-point demand to 5-point and urged the varsity authority to fulfill those demands before the test slated on October 14.

They also issued an ultimatum to the university administration of blocking the admission tests for the first-year students of the academic year 2019-20 if their 5-point demand not met by the time.

However, the agitating students of the BUET, who have been demonstrating to press their demands since after the brutal murder of Abrar Fahad on early Monday (Oct 7), announced their protest will be continued until their 10-point demand fulfilled.

Earlier, in a meeting with the students on Friday afternoon, BUET vice-chancellor Prof Dr Saiful Islam announced that the university authorities have accepted all their 10 demands and those will be implemented in time.

But the students were not convinced with that assurance as the university authorities failed to provide a deadline for fulfilling the demands.

At this point, the meeting went dismissed without any conclusion and the agitating students declared to continue their demonstration.

Later, around 10:45 pm, the students issued an ultimatum to the university authorities of blocking admission tests if 5-point demand would not be fulfilled.

“We don’t want the students of the 19th batch (next batch) to become parts of a sick academic culture,” the student representative said.

The demonstrators announced the continuation of their protests, but could not specify their plan for Saturday.

“We’ll let you know later. We may take up programmes like road blockade,” their representative said.