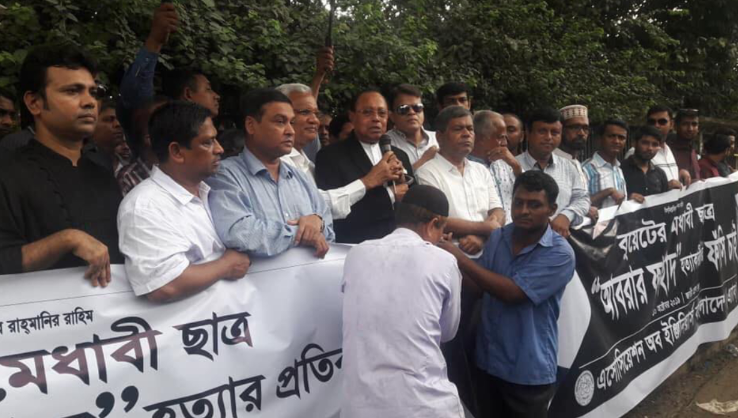 BNP Standing Committee Member Moudud Ahmed on Friday said the signing of bilateral documents with India regarding the use of Chattogram and Mongla ports and a Coastal Surveillance System is tantamount to selling the country’s sovereignty.

Speaking at a demonstration programme, he also said the day Buet student Abrar Fahad was killed for expressing his opinion in favour of the country should be observed as the ‘Martyr Abrar Day’.

“I think allowing India to uses Chattogram and Mongla ports and providing it a Coastal Surveillance System are tantamount to selling the country’s sovereignty,” the BNP leader said.

He also opposed the MoU on withdrawal of 1.82 cusec water from the Feni River by India for a water supply scheme in Sabroom town, Tripura fearing that people in Bangladesh will suffer in the dry season.

Bangladesh Sammilita Peshajibi Parishad arranged the programme in front of the Jatiya Press Club protesting against the murder of Buet student Abrar and demanding the release of BNP Chairperson Khaleda Zia.

Moudud accused Bangladesh Chhatra League (BCL) of oppressing the dissidents by setting up torture cells all over the country.

“They (BCL) have torture cells at all student halls and hostels across the country where they repress students belonging to opposition parties or the dissidents. Abrar Fahad died after being tortured for five-hours at room 2011 of Sher-e-Bangla Hall in the same style,” he said.

Abrar, 21, a resident of Buet’s Sher-e-Bangla Hall, was beaten to death early Monday reportedly by some BCL activists of the university unit following his Facebook post opposing some deals with India.

Moudud said the violent acts by BCL have given an impression that there is no government in the country.

“The people don’t want to see the current government in power anymore. They want anarchy to be removed and the rule of law, freedom of press, the independence of the judiciary and peace to be restored,” he observed.

The BNP leader called upon the country’s people to get united to get rid of the current situation.

He said the government is creating a discrimination in enforcing law in the country as Jubo League leader Ismail Chowdhury Samrat was taken to hospital for treatment within two days of his arrest while three-time former Prime Minister Khaleda Zia is not getting proper treatment for a long time.

“She’s been kept in a small cabin of PG Hospital (BSMMU) showing a negligent attitude towards her.”

He said Khaleda Zia must be freed through a united movement of people to restore democracy in the country.