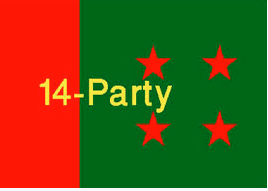 “Trial of the killers of Abrar Fahad should be held in a speedy trial tribunal,” 14-party spokesperson and Awami League (AL) Presidium member Mohammed Nasim told a press conference following a meeting of the alliance at AL central office at Bangabandhu Avenue.

Condemning the Abrar Fahad murder, he urged the BUET administration to take stern actions against such acts.

The 14-party spokesperson came down heavily on the BUET vice-chancellor (VC) questioning why the VC did not go to see the body of Abrar after the killing incident.

He said such behavior from a vice-chancellor cannot be acceptable.

Nasim expressed his optimism that the trial of Abrar murder case will be completed in the quickest possible time.

He said the proper trails of all murders are being held during the tenure of the present government.

“We want to receive different opinions. But some wrongdoers carried out the killing,” he said.

About the other programmes of the 14-party, Nasim said the alliance will hold a roundtable on ‘agreements between Bangladesh and India’ on October 22 and it will hold another roundtable on Rohingya issue on October 23. Speaking at the press conference, Jatiya Samajtantrik Dal (JSD) President Hasanul Haq Inu came down heavily on those who are criticizing the 53 agreements and memorandum of understandings (MoUs) singed between Bangladesh and India.

He gave challenge to the critics to submit specific evidence or proofs which one is against the interest of the country.

Inu said there will no effect on environment of Bangladesh if water of the Feni river is given to India in accordance with the MoU signed with India.