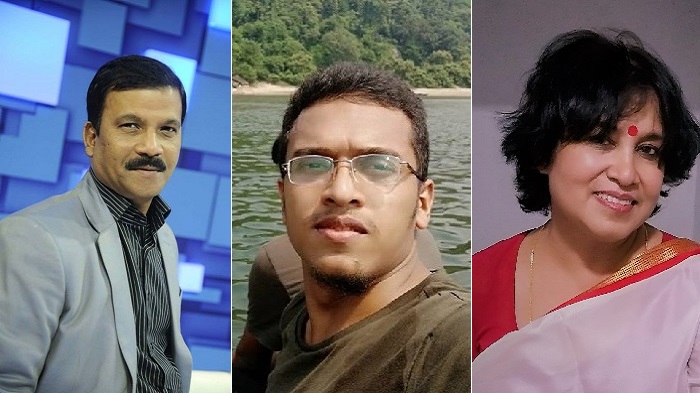 Dhaka University Professor Asif Nazrul has criticised Bangladeshi-born controversial writer Taslima Nasrin over her comment on slain BUET student Abrar Fahad that his beliefs were similar to that of the activists of Islami Chhatra Shibir.

“Taslima Nasrin has no allergy to Shiva Lingam puja, but she has all problems with the issue of offering Namaj (daily 5-times formal prayer by the Muslims),” he said.

Terming the controversial writer as ‘communal force and enemy of humanity’, Asif Nazrul worte, “Most of the masked secularists of Bangladesh are similar to Taslima. They have no problem if anyone writes ‘Bhagwan’ (Lord) or Ishwa (God), but they are very algetic to the word ‘Allah’.”

“Those, who find faults in only one religion (Islam), are the biggest communal entity and enemies of humanity,” he reacted Taslima’s Facebook status, posted on Wednesday.

In her Facebook post, Taslima Nasrin wrote, “Abrar’s lifestyles and thoughts were comparable to that of activists of Islami Chhatra Shibir, though, he didn’t officially do the politics of Shibir. That doesn’t matter. Shibir activists have right to live.”

However, the feminist writer demanded justice for slain Abrar writing that, “Those, who beat him to death, didn’t beat him with the intention of killing him. But, Abrar’s head was hit, then, he succumbed to the injury. Those, who beat him, must have to be punished. Few of the attackers have already been arrested.”