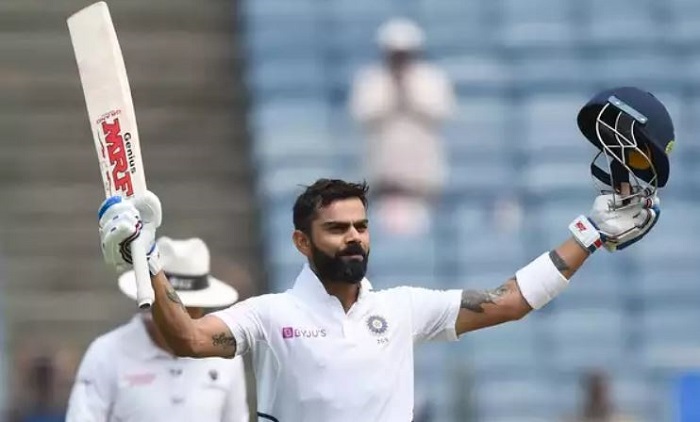 Virat Kohli and Ajinkya Rahane saw off a sprightly opening burst from South Africa's seamers before buckling down and extending India's total to 356 for 3 by Lunch on the second day of the Pune Test.

Kohli completed his 26th Test match hundred and his first of the year, 12 minutes before close of the session while Rahane worked his way to a fighting fifty himself leaving the visitors facing the prospect of chasing another big first innings total on this tour and potentially having to wait endure more aggressive declaration batting in the remainder of the the day.

South Africa had the moments as they were expected to with the second new ball only 5.1 overs old at the start of the day's play.

Kagiso Rabada and Vernon Philander got the ball to talk and even induced as many as three outside edges of Kohli's blade but the ball fell well short of the slip cordon. This was partially down to Philander's pace - in the mid 120 kph - and Kohli's abstinence from pushing at deliveries.

After a combative first 45 minutes, the runs began flowing, unsurprisingly coinciding with the arrival of debutant Anrich Nortje into the attack. Nortje worked up good pace but was guilty of bowling short and wide on more than one occasion. Rahane unfurled a cracking shot before the two batsmen began cashing in on the overcompensated full deliveries that followed. The first hour saw 41 runs scored of 14 overs.

The second hour brought just one run more from an equal number of overs but the batsmen barely faced any jitters. Rahane was significantly more decisive with his footwork against Keshav Maharaj and completed his fifty off 141 balls. The century of the partnership was achieved before Kohli moved into the 90s. There was a brief blip in the scoring as the Indian captain took 23 balls to traverse through the 90s before unfurling a pristine straight drive off Philander to end a 10-innings drought without a Test hundred.