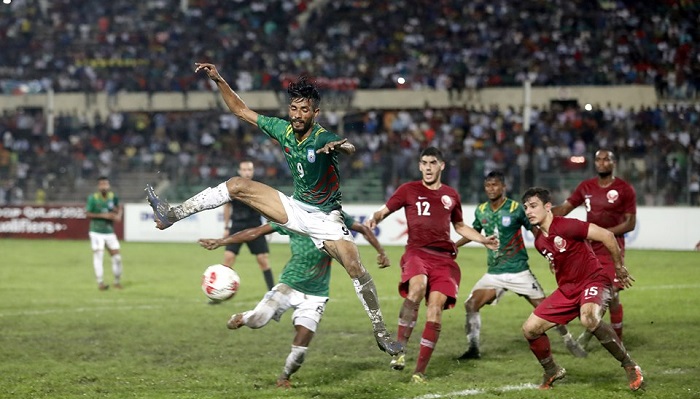 Bangladesh put on a valiant show against Qatar, the Men in Maroon, defending Asia Champion and host of the World cup 2022.

It was the match of defence for Bangladesh as they were mostly focused on defending and they did it with all their might.

Despite the sensational defending, Bangladesh had to concede the first goal courtesy of sheer brilliance of Yusuf Abdurisag who took the opportunity of being unmarked to put in a small pass from the right-wing into the nets on 28th minute of the match.

On the 34th minute of the match, Bangladesh lost a brilliant opportunity as Qatar goalie Saad Al Sheeb literally became the wall for their side fending off piercing attack by Bangladesh forward Nabib Newaz Ziban.

But in their counter-attack, Yusuf Abdurisag attempted a brilliant bicycle kick which went flying over Bangladesh goal post.

Later Qatar ace forward Hasan Al Haydos broke through in Bangladesh D-box but his advance was thwarted by Bangladesh defence as they cleared the ball and launched a futile counter offence.

In the final minutes of the first half, Bangladesh attempted to ravage Qatar's defence, as they launched back to back attacks but couldn't execute the all-important finish.

Bangladesh forward Ziban missed a cake of an opportunity which would have allowed him to equalise the scoreline for Bangladesh but he couldn't connect the ball off a cross from left-wing.

The second half was marked by Bangladesh going all out but still couldn't score the elusive goal. Bangladesh created a lot of chances.

Bangladesh's attacks were piercing but not effective as they were halted by Qatar's defence.

But Qatar were not bogged down by the never ending attacks as their substitute forward Karim Boudiaf utilised a goal-line melee to perfection on the second minute of extra-time to double their lead.

This is the third match for Qatar for Qualifiers. Qatar thrashed Afghanistan by six goals to nil in their first match. Qatar settled for a goalless draw with India in their second match.

Before today's match, Qatar and Bangladesh faced each other for the first time in an Asian Cup Qualifiers match on September 6 in 2006 in Doha, Qatar. Bangladesh tasted a 3-0 defeat to Qatar in that match.