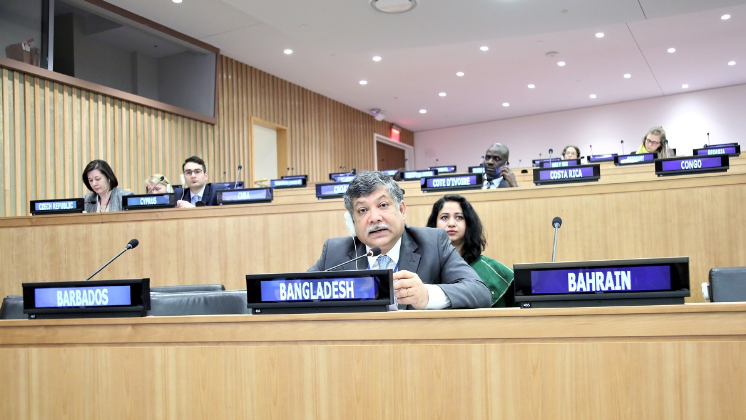 Bangladesh has urged the international community to make “proactive steps” to resolve the Rohingya crisis to enable Bangladesh to carry on its development efforts.

“This crisis must be resolved so that we can carry forward our development,” said Permanent Representative (PR) of Bangladesh to the UN Masud Bin Momen in New York.

He mentioned that Bangladesh continues to host over 1.1 million Rohingyas from Myanmar whose presence has been negatively impacting Bangladesh’s social and economic condition as well as environment.

Ambassador Masud made the remarks while delivering his speech at the general debate of the second committee of the 74th session of the UNGA in New York recently, said the Bangladesh Mission in the UN on Thursday.

The second committee of the UNGA deals with economic and financial issues relating primarily to development.

She said the UN has been able to keep continuous attention on the crisis, bring together member states for conversation about the crisis and make some progress on accountability issues on human rights violations.

Ambassador Masudsaid stronger global partnership must be forged to address challenges that hinder development specially the success of 2030 Agenda.

Referring to the experience of Bangladesh in pursuing development, the PR mentioned Prime Minister Sheikh Hasina’s visionary leadership, bold and resolute development plans and people-centric policies to create a prosperous Bangladesh which was envisioned by the Father of the Nation Bangabandhu Sheikh Mujibur Rahman.

Mentioning the success of Digital Bangladesh, the PR said the government is investing in human capital through equal access to technology and has set up 5800 digital centers which are providing 600 e-public services to people’s doorsteps.

Recalling the launching of Bangabandhu Satellite-1 last year, he said the satellite has played a crucial role in providing broadcast-based services in remote areas and improved communications for development.

Besides these, Ambassador Masud spoke on the “incredible success” Bangladesh achieved in implementing mega projects like Rooppur nuclear power plant.

He also reiterated Bangladesh’s aspiration to become a Middle-Income Country by 2021 and a developed country by 2041.