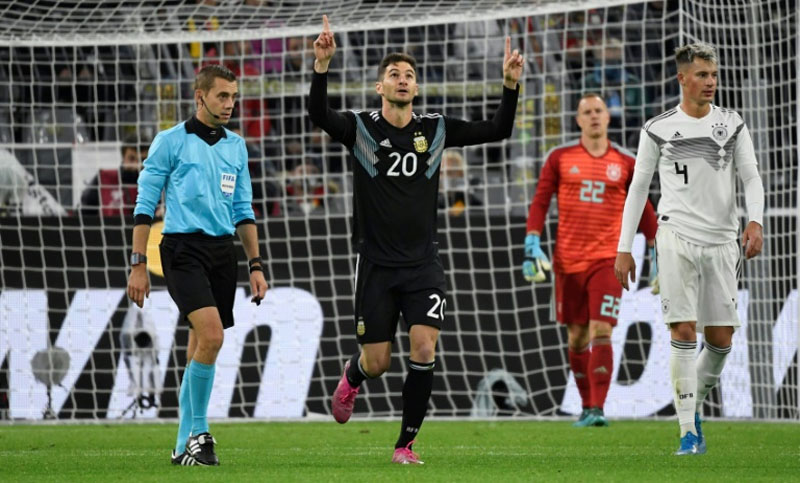 Lionel Scaloni praised his battling Argentina side, missing Lionel Messi, as they scored second-half goals to earn a 2-2 draw in a friendly against an experimental Germany team Wednesday.

The Germans flew into a 2-0 lead with first-half goals by Serge Gnabry and Kai Havertz in Dortmund before Lucas Alario turned the game when he came on for Argentina with an hour gone.

The Leverkusen striker pulled a goal back, then set up Lucas Ocampos for a deserved late equaliser.

"We matured during the game," said Argentina coach Scaloni. "We made two or three mistakes in the first half, but got a grip in the second half, were more patient and we take a lot of positives for the future.

"I was impressed with the attitude, we didn't give up when we went 2-0 down."

Germany head coach Joachim Loew admitted his side faded after a bright start.

"We wanted to be in the game right from the off, but unfortunately we couldn't hold on for 90 minutes," said Loew.

"We lost a few balls, a bit of courage and got into trouble."

Loew was forced into a hastily re-arranged defence as Koch replaced centre-back Niklas Stark, who pulled out before kick-off with a stomach bug.

Despite 13 withdrawals due to either illness or injury, Germany impressed early against an Argentina team missing Messi, Sergio Aguero and Angel di Maria.

With Messi suspended for comments made at the Copa America, Juventus' Paulo Dybala partnered Lautaro Martinez up front for Argentina.

The friendly was a repeat of the 2014 World Cup final, yet Argentina's Manchester United defender Marcos Rojo was the only survivor when the Germans won in Rio de Janeiro.

A week after scoring four goals for Bayern Munich at Tottenham, Gnabry put Germany ahead on 15 minutes.

The winger used his pace when Atletico Madrid's Angel Correa lost possession to get in behind the defence to stab the ball past Argentina goalkeeper Augustin Marchesin.

When Rojo then lost the ball to Waldschmidt, Gnabry turned provider, using his pace to present Havertz with a simple tap-in on 22 minutes.

It should have been 3-0 when Brandt just failed to connect with a Niklas Suele header as Germany looked like they would run away with it.

However, the South Americans had the best of the second-half, starting when Scaloni put Alario on for Dybala on 62 minutes.

The visitors equalised when Alario set up Sevilla's Lucas Ocampos, a second-half replacement for Correa, to blast past ter Stegen five minutes from time.

"In the first half we stood up to them, in the second we were chasing the game and leaked the goals.

"That's happened to us a few times now," Kimmich admitted, knowing Germany must do better in Sunday's Euro 2020 qualifier at minnows Estonia.