Admissibility of Digital Evidence in Court 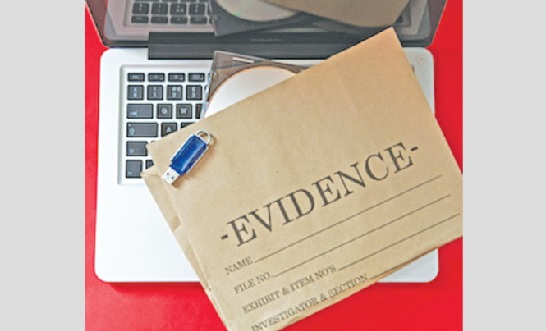 With the advent of digitalisation, the world has witnessed not only technological revolution but also sophisticated, critical, digital and more organised means of committing crimes. Unfortunately our orthodox prosecution laws have had a paralysing impact on justice disposal system in these changed circumstances.

The widely publicised cases of murders such as the murders of Khadija, Biswajit and Rifat raised the question of whether and how video may be admissible in evidence within present framework of procedural law. In such instances, judicial interpretation has played a significant role.

Digital evidence is probative information stored or transmitted in digital form such as data, photograph, audio, video, DVD, memory card, hard disk, e-mail, telegram, telex. When communication of any sequence of crime is recorded or cast or stored or transmitted into works of digitalisation, there arises question to use them in the judicial proceedings.

The laws on criminal procedure in Bangladesh, such as, the Evidence Act of 1872 and the Code of Criminal Procedure (CrPC) 1898 prescribe no explicit provision recognising or approving of its admissibility into judicial proceedings but contain scope of judicial interpretation which may allow for the same.

The words "any matter expressed or described upon any substance by means of letters, figures or marks" under the elucidation of "Documentary Evidence" as codified in section 3 of EA, section 3(16) of General Clauses Act, 1887, section 29 of Penal Code, 1860 bear a remarkably meaningful glimpse which can be interpreted to include digital evidence, since the word “matter” is a term of the widest amplitude. Its ordinary dictionary meaning is anything which has mass and occupies space, that is to say, physical substance in general, as opposed to the spirit, mind etc. Again the word "substance" is a term, which according to oxford dictionary meaning is the quality of being based on facts or the truth.

Illustration to section 3 of EA says that words printed, lithographed or photographed are documents. Again Explanation 1 and 2 of section 29 of PC say that it is immaterial by what means or upon what substance and whatever is expressed by means of the letters, figures or marks are formed shall be deemed to be formed, expressed by such letters, figures or marks within the meaning of this section.

In Mrs. Khaleda Akter VS State recorded in 37 DLR (1985) 275, the court took the view that if for the purpose of recording certain matter on magnetic tapes for the purpose of showing it on television by application of technology a video cassette or tape, is made, that should come within the definition of document and held that audio cassette and video shall be admissible in evidence. In Biswajit murder case recorded in 70 DLR (2018) HCD 26, the court took the view that video footage, still photographs and paper clippings are well admissible in evidence even without corroboration by the authors.

Real evidence as adopted in section 60 of EA says about material other than document. Secondary evidence as adopted in section 63 and 65 of EA say about admissibility of reproduction of the original and Illustration (a) to sec 63 refers to photograph, if proved original ranks to secondary evidence. Again as per section 72 of EA, digital & electronic evidence has no bar to be proved as if it was unattested.

In ultimate analysis, judicial interpretation articulates that digital evidence is an amplification of matter expressed or described upon digital substance by means of letters, figures or marks and inclusive of material and secondary evidence. It verbalises that the other forms of digitalisation have the same legal entity.

If question as to authentication and tampering of digital evidence arises, the law prescribes gateway to remove any sort of doubt. Expert opinion rule under section 45 of the Evidence Act provides the scope to seek expert opinion of science. Search and examination rule of section 165 and 161 of the Code of Criminal Procedure empower the Investigating Officer to attach anything and examine its maker. This procedure may be followed to cross-examine the makers of the documentary evidence.

Even the hearsay rule under section 59, 60 of EA empowers the trial court to presume existence fact facts proved by oral evidence.

Again rule as to proof as adopted in section 3 of EA empowers the trial court to decide whether such a fact of digital evidence is proved.

In Biswajit murder case recorded in 70 DLR (2018) HCD 26, it was observed that video footage was officially handed over to the investigation Officer under a seizure list officially by TV channel; so, its recording and publication / telecast were authenticated ipso facto.

In further ultimate analysis, definition and proving process of digital evidence are inclusive of judicial interpretation by virtue of which it is surmised that prosecution law has no bar to admit digital evidence.

Having a regard to judicial interpretation, the trial court should come out of rigid view and follow strategic way which is supported by the prosecution law. Its evidence assessment strategy shouldn’t confine to an orthodox view rather broaden its outlook in line with the outlines as emerged out of Judicial interpretation.

To recapitulate, although digital evidence may be admissible under the present law but as proliferation of technology expands and the nature of electronic information grows to be even more complex, the law should be revised to meet the needs of the time.