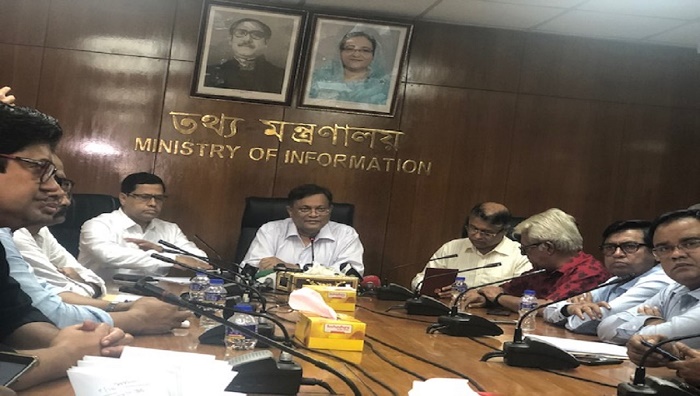 Information Minister Hasan Mahmud on Wednesday said it is completely illegal that many foreign companies in Bangladesh are showing foreign channels through Direct-to-Home (DTH) downlink service without the government’s approval.

He made this remark during a meeting with the leaders of Federation of Television Professionals Organisation (FTPO) at the Secretariat today(Wednesday).

“Since the inception of this DTH service, Tk. 700-800 crore is being transferred to foreign countries through hundi which is harmful for Bangladesh,” the minister said.

“We have taken many steps to bring discipline to the broadcasting sector of Bangladesh. Previously, I managed to stop foreign advertisements in Bangladeshi channels,” he added.

According to the minister, government’s permission will be required to dub any foreign movie in Bangla. A preview committee will be set up to ensure if this directive is being implemented or not.

Replying to a question from reporters, Hasan Mahmud said many of the accused in the Buet student murder have been arrested as per the instruction of Prime Minister Sheikh Hasina. All the necessary measures will be taken to ensure exemplary punishment to the killers.