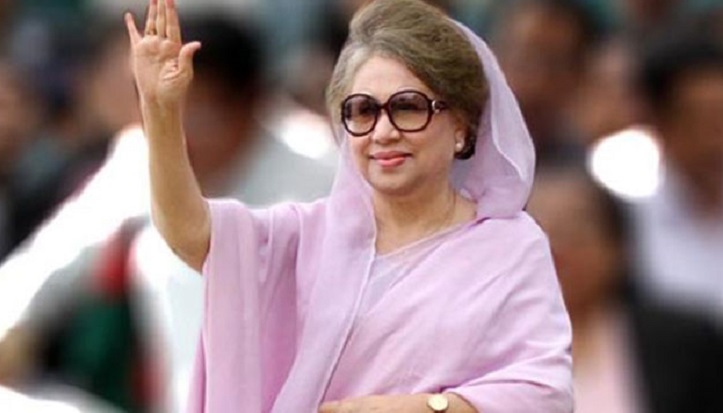 A section of BNP central leaders want their party chairperson Khaleda Zia‘s release from jail on parole for her treatment abroad while the BNP chief insists on bail.

Even some leaders of the party are trying to convince Khaleda Zia to seek parole and take treatment abroad, party insiders said.

They said the BNP chief is still not interested in getting released on parole but she agrees to go abroad only after getting bail, said a central leader of the party wishing not to be named.

“When the parole issue was raised before her, Madam [Khaleda Zia] said she didn’t commit any crime and she deserves bail,” said the BNP central leader.

Gayeshwar further said, “She won’t receive anybody’s compassion or want to be freed on parole. She’s an uncompromising leader. She is physically weak, but her morale is very strong and she will not bow down to anybody. No one has capacity to give her compassion.”

However, the party insiders said Khaleda Zia insisted on her release from jail through bail and then she can go abroad for treatment.

Another BNP standing committee member Moudud Ahmed at a programme on Friday said, “Khaleda Zia’s release is not possible without spontaneous movement of people. Khaleda Zia will suffer but she won’t compromise with this government.”Talking to the daily sun, BNP standing committee member Nazrul Islam Khan said, “We are now trying to ensure her [Khaleda Zia’s] bail from court. At the same time, we are also holding some programmes demanding her release. We think she deserves bail.”

Asked whether Khaleda Zia wants her release from jail on parole, he said they are yet to discuss the matter with her.

Khaleda, who is serving jail term for graft, is now being treated at Bangabandhu Sheikh Mujib Medical University (BSMMU) for various ailments and according to her party leaders, she requires treatment abroad. She was sent to jail on February 8 last year.

Talking to the daily sun, a BNP leader said they have learnt from some leaders who regularly maintain contact with the party‘s acting chairman Tarique Rahman that he (Tarique) as well as some senior party leaders is interested in securing Khaleda Zia‘s release even if it requires any understanding with the government.

Another central leader claimed that some of the party‘s central leaders are also interested in making an understanding with the government over Khaleda Zia’s release as they think that she needs treatment immediately. “If she is freed from jail, then the party also will become vibrant in her presence,” he added.

All the seven BNP lawmakers of the 11th parliament on Tuesday and Wednesday met Khaleda Zia at the hospital in phases. The lawmakers claimed that their leader was ‘very sick.’

“We urge the prime minister — please take steps for the release of our leader on bail showing your political farsightedness instead of taking bureaucratic advice,” BNP MP GM Siraj told reporters on Wednesday after meeting Khaleda Zia at the BSMMU.

Replying to a question, the BNP leader said, “Our leader is a political prisoner. We believe madam will not be freed without a political decision.”

Rumin Farhana, who also met Khaleda Zia, said, “I asked her about parole. But madam [Khaleda Zia] told me that bail is her right and according to the country’s law she deserves bail. She said she didn’t commit any crime and then why the question of bail will arise?”

Referring to the need for specialised treatment for the BNP chief, BNP joint secretary general Harunur Rashid MP said she has to go abroad for better treatment. “If she [Khaleda] gets bail today, she will go abroad for treatment tomorrow,” he told reporters after a meeting with Khaleda on Tuesday.

“We met Khaleda Zia at the hospital on Tuesday. She wants to go abroad if she gets bail from court. Later, I also met Awami League general secretary Obaidul Quader on Wednesday and informed him about Khaleda Zia’s health condition. Obaidul Quader told me that he would inform the matter to Prime Minister Sheikh Hasina,” Harun told the daily sun.

Asked about their next step to ensure the release of Khaleda Zia from jail, he said they will discuss the issue in the upcoming session of Jatiya Sangsad. “The BNP secretary general can tell the party’s step to ensure madam’s release,” the BNP leader said. Fakhrul is now staying in Singapore for medical treatment.

The BNP leaders are divided over finding a way for Khaleda Zia’s release as a section of them is in favour of making an understanding with the government while there are others who stand against the move.

The party insiders said many of the senior leaders do not think it is possible to free Khaleda Zia, through a movement in the party’s current poor state. But some of the BNP’s leaders want her to be treated abroad, even if it requires any understanding with the government or parole (executive order).