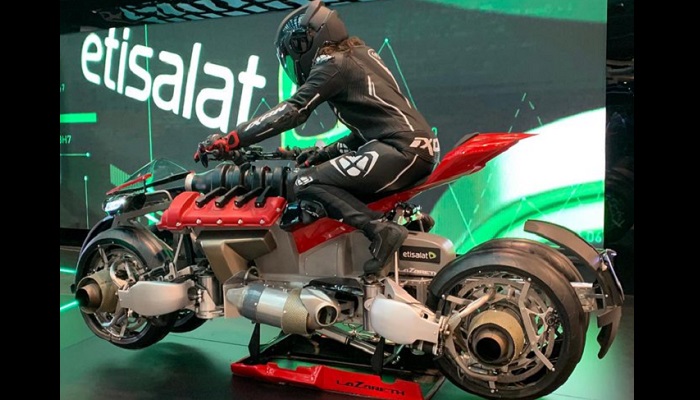 Visitors at the GITEX Technology Week were left astounded after Etisalat unveiled its flying motorcycle at the World Trade Centre.

On its official Twitter account, Etisalat on Monday announced: “With an 8-cylinder engine, four jet turbines, and in just 60 seconds, you can ride Lazareth Switch from driving mode to flight mode.”

GITEX Technology Week was inaugurated on Sunday and runs until October 10.

The Moto Volante flying motorcycle, created by Ludovic Lazareth, combines 96,000-revolutions per minute (rpm) JetCat jet turbines and hydraulic actuators that take the vehicle off the road and into the air. Earlier reports also said that two extra jets can be added near the middle of the chassis to handle more weight.

According to Lazareth, the flying motorcycle can convert from a regular motorbike to fly mode in approximately 60 seconds. All it needs is the press of a button, which activates the transition gradually heating the jets for liftoff. Lazareth has been able to hover-tested the bike on tethers to a height of one metre.