Was BUET student Abrar murdered for his Facebook status? 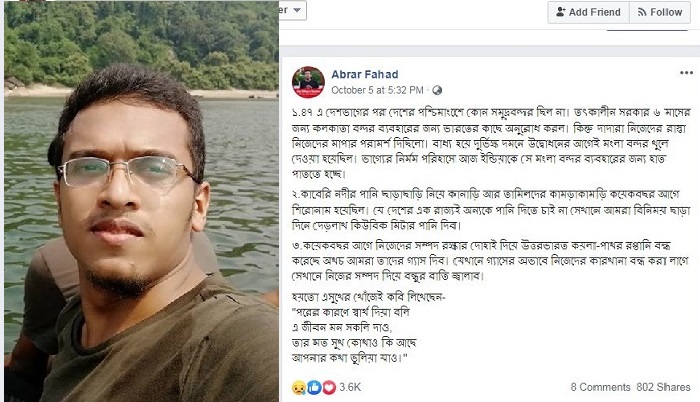 A Facebook status, posted by slain BUET student Abrar Fahad on October 5, has become the centre of all discussions regarding his brutal beating allegedly by the activists of BCL, the ruling party’s student wing.

Abrar, a second year student of the Electrical and Electronics Engineering Department of the Bangladesh University of Engineering and Technology (BUET), was allegedly beaten to death by the BCL activists early Monday.

He was rushed to the Emergency Department of the Dhaka Medical College and Hospital (DMCH) at 6:00 am after allegedly being beaten by a group of BUET unit’s activists of Bangladesh Chhatra League (BCL) in his own hall.

Later, Abrar, a residential student of BUET’s Sher-e-Bangla Hall, succumbed to his injuries.

Some fellow hall-mates of Abrar, wishing to be unnamed, alleged that their mate might be beaten by BCL activists for his Facebook status regarding bilateral relations between Bangladesh and India.

In his Facebook post, the issues of allowing India to use Mongla port, withdrawing water from the Feni River and importing LPG from Bangladesh were discussed by him.

The status has been translated from Bangla to English for the readers of Daily Sun below:

1. There was no sea port in the western part of the country after the partition of Bengal in the year of 1947. The then government of the country asked the Indian authorities requesting to allow us to use Kolkata sea port for six months. But ‘Dadara’ (Elder brothers) suggested the then government to manage the problems in own ways. As a result, the Mongla port was opened before its inauguration for tackling the famine. What an irony of fate that today India has to beg seeking permission to use the Mongla port.

2. The dispute between the residents of Karnataka and Tamil people made the media headlines over releasing of Cauvery river water to Tamil Nadu few years ago. A province of a country does not want to share river water with another one. But we will allow withdrawing 1.5 lakh cusec of water from a trans- border river without any returns.

3. North Indian authorities imposed a ban on export of coals and rocks in the name of conserving their natural resources few years ago. But, we will give them gas (LNG). While, our factories have to be shut down due to the shortage of gas, we will torch the light of our friend using our resource.