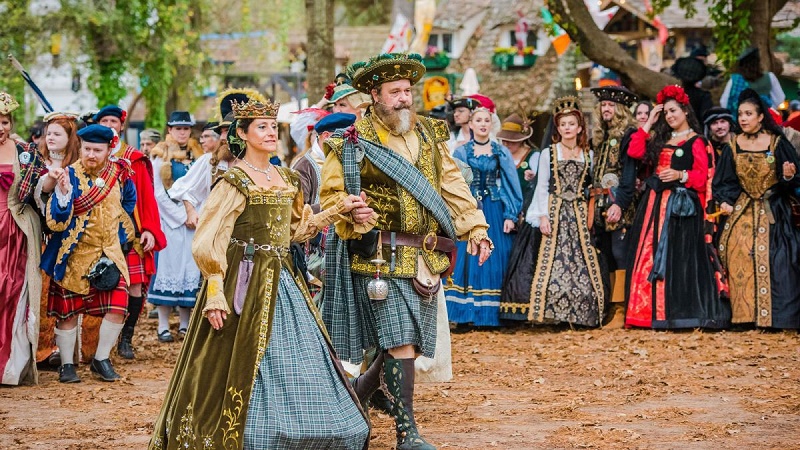 Texas Renaissance Festival kicked off in the western U.S. state of Texas on Saturday, bringing the magic of the Renaissance time to life through Dec. 1.

The 45th annual festival features the premiere of "Return to the Renaissance" theme, which takes a nostalgic look back at the Renaissance Festival's beginnings and massive growth in the past years.

The festival holds a total of 10 theme weekends in the season schedule, including 1001 Dreams, Pirate Adventure, Barbarian Invasion and Celtic Christmas.

The event has attracted many first-time attendees. Portuguese visitor Hailey Coelho told Xinhua that this is her first time coming to the festival.

"I'm really excited. Me and my family bought costumes on the internet, and we mix and match to dress however we like. This is my dirndl dress," she said.

Through activities like dining at The King's Feast, Tea and Strumpets with the queen, scotch tastings and brewery school, the Renaissance Festival is dedicated to transporting festival goers into a 16th-century European village once they pass through the gates.

"I think the festival is an escape from the reality and a perfect weekend to spend with family members," said Cynthia Meyers, who has been coming to the festival almost every year since 1981.

The Texas Renaissance Festival, one of the nation's largest and most acclaimed, features world renowned live entertainment, works by master artists and craftspeople, award-winning food and drink, hand-powered rides and games, and over 100 interactive characters.

Established in 1974, the event attracts over half a million visitors each year to its 55-acre (over 222,000 square meters) New Market Village and Fields of New Market Camp grounds in Todd Mission, about 80 km northwest of Houston, the fourth largest city in the United States.