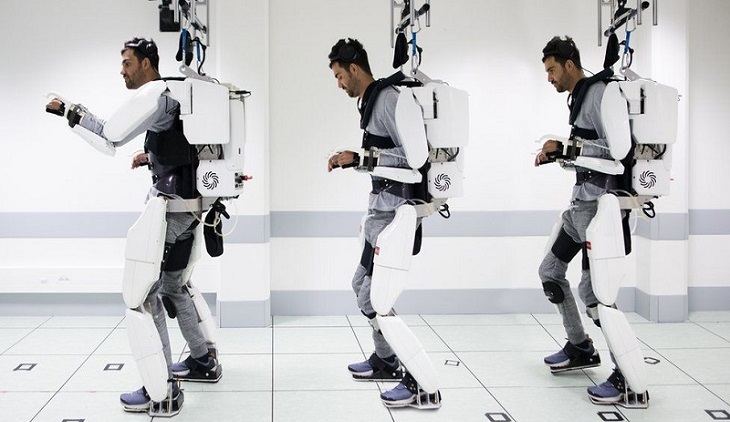 A man has been able to move all four of his paralyzed limbs with a mind-controlled exoskeleton suit, French researchers report.

Thibault, 30, said taking his first steps in the suit felt like being the "first man on the Moon".

His movements, particularly walking, are far from perfect and the robo-suit is being used only in the lab.

But researchers say the approach could one day improve patients' quality of life.

Sixty-four electrodes on each implant read the brain activity and beam the instructions to a nearby computer.

Sophisticated computer software reads the brainwaves and turns them into instructions for controlling the exoskeleton.

When the person thinks "walk" it sets off a chain of movements in the robotic suit that moves his legs forward.

And the person can control each of the arms, maneuvering them in three-dimensional space.

How easy was it to use?

Thibault, who does not want his surname revealed, was an optician before he fell 15m in an incident at a night club four years ago.

The injury to his spinal cord left him paralyzed and he spent the next two years in hospital.

But in 2017, he took part in the exoskeleton trial with Clinatec and the University of Grenoble.

Initially, he practiced using the brain implants to control a virtual character, or avatar, in a computer game, then he moved on to walking in the suit.

"It was like [being the] first man on the Moon. I didn't walk for two years. I forgot what it is to stand, I forgot I was taller than a lot of people in the room," he said.

It took a lot longer to learn how to control the arms.

"It was very difficult because it is a combination of multiple muscles and movements. This is the most impressive thing I do with the exoskeleton."

How good is the exoskeleton?

The 65 kg of sophisticated robotics is not completely restoring function.

However, it is a marked advance on similar approaches that allow people to control a single limb with their thoughts.