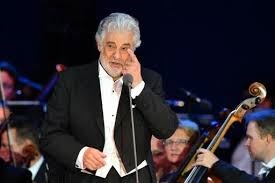 Placido Domingo was honored Saturday with Mexico’s Batuta prize but the Spanish tenor was absent from the ceremony amid a floor of sexual harassment accusations.

The opera superstar has been accused by 20 women of forcibly kissing, grabbing or fondling them, in incidents going back to at least the 1980s.

He was chosen in May to receive the first edition of the prize along with 15 other honorees, but two days before the award ceremony, organizers said they had decided to withhold the award until the scandal was “clarified.”

They reversed course on Friday but announced Domingo would not appear in person, instead addressing the gala in a recorded video.

“I am very sorry I cannot be present with you tonight, but I send this greeting with all my love, and I thank the organizing committee,” said Domingo, in which he did not refer to the allegations against him.

The award comes after Domingo, 78, resigned Wednesday as general director of the Los Angeles Opera, effectively ending his career in the United States.

He also withdrew last week from all performances at New York’s Metropolitan Opera. Several other US opera houses have canceled concerts featuring him because of the sexual harassment allegations.

The “King of Opera” has responded that “all my interactions and relationships were always welcomed and consensual.”

Highlighting international fault lines in the #MeToo scandal, Domingo’s career has continued to thrive in Europe even as it is imperiled in the United States.

He performed to a chorus of bravos this summer in Austria and Hungary, and has upcoming concerts in Zurich and Moscow.

In his video message, Domingo said he hoped to travel to Mexico soon and perform a concert to celebrate six decades since his debut at the capital’s Palacio de Bellas Artes.

The Batuta, which organizers hope to make an annual prize, will be awarded to 16 honorees including British composer Michael Nyman, Mexican soprano Maria Luisa Tamez and Mexican conductor Enrique Batiz, who is himself facing sexual assault allegations.