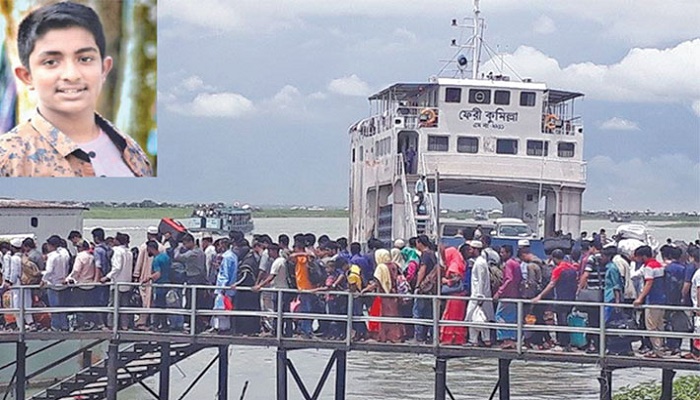 About two months back, a boy named Titas, son of Tapas Ghosh from Kaliya in Narail, a student of Kaliya Pilot Secondary School, Narail, was initially taken to a private hospital in Khulna after he was severely injured in a motorcycle accident. He was later being shifted to Dhaka in an ambulance equipped with an intensive care unit, as the doctor flagged his condition as critical. The ambulance reached the jetty at around eight pm. The ferry was at the jetty at the time. They begged for help from the jetty operators and the police on duty, but no-one budged and the ferry stayed there. The authority could not start the ferry despite request from Titas’s family as they received an ‘emergency message’ from the Madaripur Deputy Commissioner, said the BIWTA officials in Kathalbari jetty.

As the ambulance was kept waiting for three hours for the car of a VIP person at Mawa-Kathalbari ferry ghat, the boy tragically died as the ferry was crossing the mid-river. It was through this incident that the VIP system was announced invalid at the behest of the Prime Minister. But it is a matter of great regret that the VIP system is still in operation by some brokers of the administration overthrowing the dictate of the PM.

Usually, the cars remain in line as per order of their sequence of arrival, but if one can convince the police and the brokers with some money, and then they can break all the line sequence to get advance preference. We were waiting in line at a ferry ghat on our way back home from Dhaka last week, suddenly, I saw a few cars crossing the left side of the road, and we also followed them and got on the ferry without being in any lines.