‘Village Supermarket’ in Khulna fails to take off 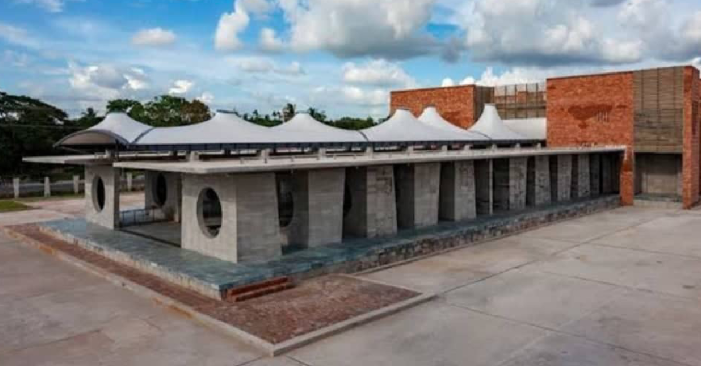 Opened amid much fanfare over a year back, the ‘Village Supermarket’ in Dumuria upazila to facilitate farmers to sell their agricultural commodities at fair prices, has failed to pick up the pace, clouding its much-hyped goals.

Non-availability of loans by farmers, the reluctance of buyers to measurement through metre scales and lack of sincerity of the implementing agency are said to be the reasons why the supermarket has failed to gain momentum.

Solidaridad Network Asia, an international NGO, has set up the modern market on 2.10 acres of land at Tipna village at a cost of Tk 10.18 crore.

The NGO took the initiative to construct the market in 2015. Work on the market began in December, 2016 with financial support from the Netherlands.

Under the project, depots, a chiller ice factory with a capacity to produce 10,000 litres of ice, one mosque, one electrical mechanical room, a horticulture processing zone, another horti-packing zone, an aqua processing zone, one aqua packing zone, one aqua arat, a horti-arat, bank, one childcare centre, a farmer training centre, an office security room and one toilet zone were constructed.

Mokter Hossain, a local farmer, said the aim of setting up the market, was to buy agricultural commodities like vegetables, fruits, fish and milk from marginalised farmers at fair prices and supply those to the outlets of superstores at divisional cities apart from export.

Another goal was to provide training to farmers on how to cultivate various crops in a modern method, he said, adding that nothing is going to be achieved so far. “Neither there’s any buyer nor any seller.”

M Mohsin Hossain Sheikh, assistant general secretary of the market managing committee and local union parishad member, said the market has all the facilities, including CCTV cameras and banking.

However, it has failed to gain momentum mainly for two reasons, he said.

“Vegetables, fruits and fish are measured in digital metre scales which buyers do not like and farmers who sell their produces at this market don’t get loans from lenders.”

Explaining the matter, Mohsin said farmers are given loans beforehand for selling their produce at other markets like Dumuria, Kharnia and Thurka. “As a result, they can’t sell their produces at the Village Super Market although they want to,” he said.

Besides, he claimed, Solidaridad Network Asia failed to keep its promises. “They had promised to buy produces from this market and sell those to superstores across the country and export those. But they’ve failed to live up to their promises. So, the market has turned out to be failed case.”