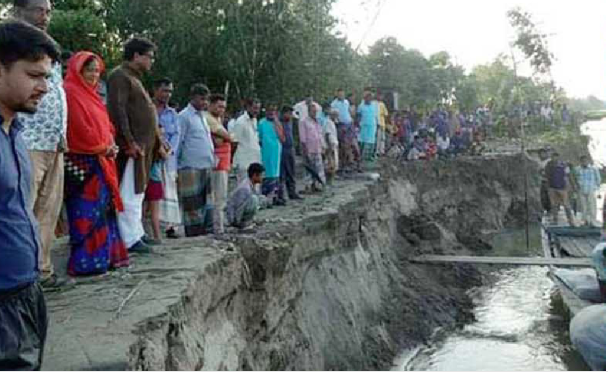 More than 200 dwellings and croplands went into the gorge of the Dudhkumer River in Bhuruingamari upazila in the last two weeks as erosion by the river has turned serious due to recent heavy rainfall and onrush of water from the upstream.

Visiting the upazila, the UNB correspondent found that more than 200 houses in Paiker Chara, Char Bhurungamari and Sonahat Unions were washed away by the river, leaving hundreds of people homeless. Besides, embankments and roads in the area were severely damaged.

Islampur Jam-e Mosque, a graveyard and an Eidgah in Char Bhurungamari union are also facing great threat of erosion.

Alauddin, a resident of Islampur village, said river erosion devoured vast lands, including his homestead, within a couple of days, leaving 60/70 families homeless. Some victims along with their valuables have taken shelter in their neighbour’s houses while others are passing days under open sky.

Fazlul Haque, chairman of  Char Bhurungamari Union Parishad, said a letter has been sent to the  upazila administration  to take necessary steps in this regard.

Contacted, Upazila Nirbahi Officer Magfurul Hasan Abbasi said victim families were provided with three metric tonnes of rice each. Besides, 5,500 geo bags(bags filled with sand) are being dumped in the erosion-hit area in collaboration with the Water Development Board.