Woman climbs inside lion’s enclosure in zoo and dances 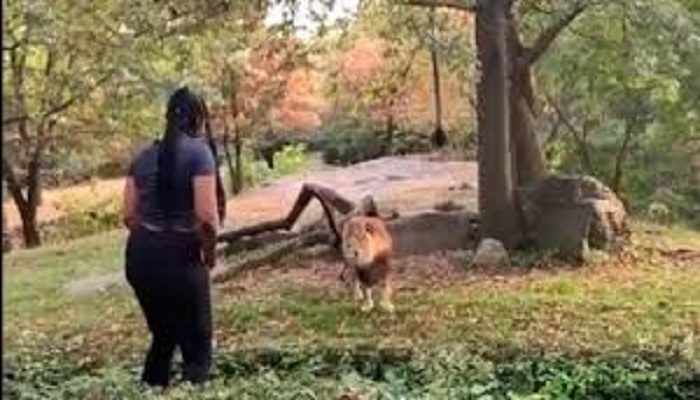 It’s a video of a dancing woman at Bronx zoo in USA that has baffled people and left many asking the question “why?” It’s because, to show her moves, the woman climbed inside the enclosure of a lion. Let that sink in.

The video shows the woman standing still and looking at the lion which is standing at an uncomfortably close distance. Within seconds, she starts moving her hands in dance gestures, reports Hindustan Times.

It appears that the video was first posted by Instagram user Real Sobrino. However, now it’s being shared by many across various social media platforms.

People had a lot to say about her “dance.” From expressing their suspicion about the woman’s intelligence level to commenting about the lions “confused look,” people dropped all sorts of comments.

“If the lion bit her stupid ass it would have suffered consequences,” wrote an Instagram user. “Even the Lion is in shock,” commented another. “Absolute idiot. What I’m upset about is if the lion did anything to her, he’d probably be put down. What a selfish and stupid thing to do,” commented a third. “Can someone find her and ask her exactly what was she thinking? Or if she was actually thinking,” wondered a fourth.

Amidst hundreds of comments, an Instagram user – going by handle name queenempress_myahlaree - claimed that it’s her in the video. She wrote – “This is me in the video.” Further adding, “ohh there’s a big ditch” – presumably hinting about a ditch between her and the animal.

Another user voiced the same notion and commented, “There’s a huge gap that can’t be seen between her and the lion. Huge. It’s a deceptive angle of the video. Sorry folks. Been there a hundred times.