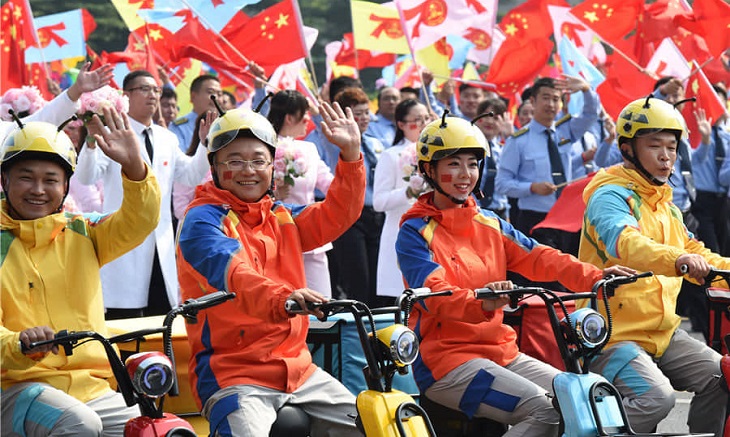 Amid much festivity and fanfare, the People’s Republic of China (PRC) celebrated its 70th founding anniversary, better known as the National Day, on Tuesday. The Chinese marked their national auspicious and glorious occasion with due patriotic fervor and festivities. On the occasion, the entire country especially its megacities including Beijing wore a festive look and its historic Tiananmen Square in the capital witnessed a national parade in the morning and a grand gala in the evening.

Through the parade China showcased its great achievements in different sectors to the world. The communist country displayed its military strength and national unity with spectacular celebrations. The parade highlighted the journey of China from an isolated nation to the second largest economy of the world. The fabulous military display portrayed how China is making great contributions to the world development. Millions of people around the world watched troops, and military hardware in the national parade with helicopters and jets soaring in different formation overhead. The parade, with Chinese leaders watching on, featured state-of-the-art weaponry, dramatic formations and myriad symbols celebrating the country's development. The morning of celebrations on Tiananmen Square began with a 70-gun salute fired from 56 cannons, representing China's 56 ethnic groups, a symbol of unity that threaded through the celebrations. 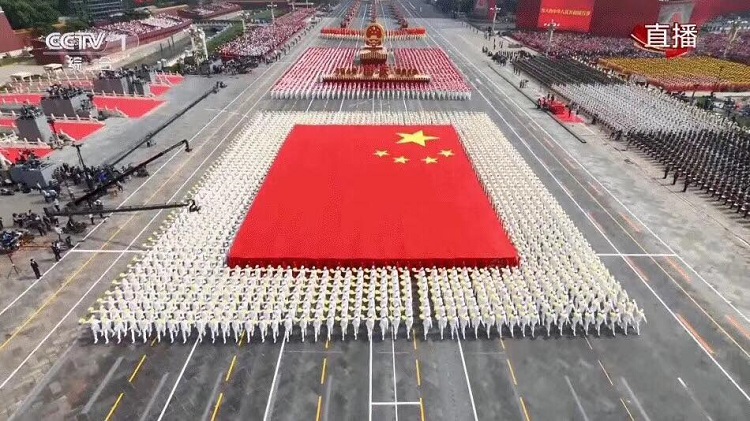 In his speech, Chinese President Xi Jinping combined a review of China's achievements over the past 70 years with an emphasis on the country's unity and continued prosperity. In an eight-minute speech, the president said Chinese people of all ethnic groups have made great achievements that amaze the world over the past seven decades through concerted efforts and arduous struggle. "On our journey forward, we must uphold the leadership of the Communist Party of China, maintain the principal status of people, and stay on the path of socialism with Chinese characteristics,” he added.

More than one million Chinese witnessed the celebration parade in Beijing. Around 100,000 people and 70 parade floats marched before Tiananmen Square to showcase the nation's socio-economic accomplishments over the decades. The military parade, which followed President Xi's review of the thousands of troops lined along Chang'an Avenue, featured dramatic air and foot formations from different branches of the People's Liberation Army's (PLA) as well as a broad display of military hardware. Tanks, drones, aircraft and missiles were all featured in the 80-minute parade, which was especially notable for the new weapons on display. Among the debuts were first glances of the DF-17 conventional missiles, DF-100 cruise missiles and DF-41 intercontinental strategic nuclear missile.

The contributions of female soldiers to the PLA and of Chinese troops to United Nations peacekeeping forces around the world were given particular prominence in the parade, which concluded with a series of air echelons featuring more than 30 types of aircraft. Apart from the military parade, a mass parade – with around 100,000 participants – colorfully told China's story from the process of the country’s founding through to the present day, highlighting the country's growth from early years of impoverishment to its development into the world's second-largest economy.  All corners of China were celebrated, a display of unity featuring representatives of China's 56 ethnic groups as well each of its provinces, municipalities and regions. People from Hong Kong and Macao SARs and Taiwan joined a formation dedicated to "One Country, Two Systems" principle. The strengthening of the rule of law, ethnic unity, and crackdown on corruption were among the domestic achievements showcased, alongside economic development, rural revitalization and poverty eradication.

The national parade ended in dramatic style, with 5,000 people celebrating the formation of the PRC in 1949 and 70,000 pigeons and balloons released into the Beijing sky. But the celebrations continued with a grand gala in Tiananmen Square in the evening. The gala featured fireworks, music and dance performances, turning Tiananmen Square into an open-air stage. The gala kicked off promptly with 70 columns of synchronized fireworks shooting into the night sky above Tiananmen Square, representing the 70 years since New China was founded. Another set of fireworks also formed the number "70" in the night sky. A total of 60,000 people aged six to 66 years performed in the square. Among them were people from all walks of life, including farmers, workers, teachers, doctors and delivery men.

As part of the celebrations, foreign journalists took part in a series of field interviews across China. They visited areas including mobile center to experience the 5G network, the Zhongguancun innovation demonstration park, and Qianmen district to better understand China. More than 1000 foreign journalists from 82 media outlets from across the world participated in the weeklong field interviews. Besides, a total of 15858 prisoners have been pardoned and released by the Chinese courts ahead of the anniversary.