Hilsa export to India gets stuck at Benapole port 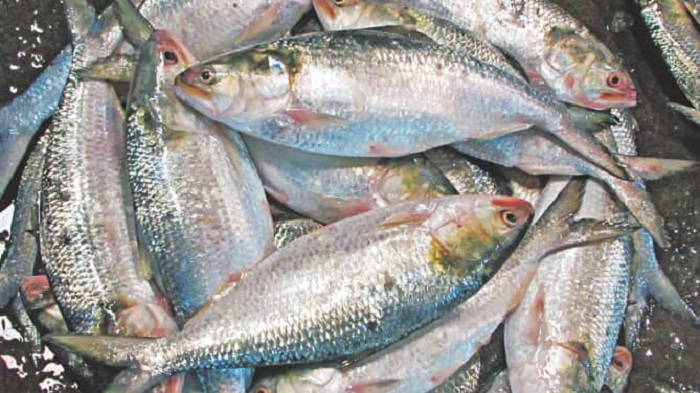 The first shipment of Hilsa fish to India as a gesture of goodwill from Bangladesh on the occasion of Durga Puja was stuck in Benapole port on Sunday.

The shipment of 24 metric tonnes of Hilsa has been stuck at Benapole port as proper papers were not placed before the customs house.

Besides, trucks of Hilsa consignment have not reached the port till Sunday evening (7:30 pm).

According to customs officials, only one truck of Hilsa consignment reached the port on Sunday afternoon and they hoped papers of fish export likely to get on Monday morning.

The commerce ministry on Wednesday (September 25) approved the export of 500 tonnes of Hilsa to India as a gesture of goodwill from Bangladesh on the occasion of Durga Puja.

Aquatic Resort Limited of Gazipur got the permission of exporting the Hilsa to India through Naj Impex Private Limited of Kolkata at the rate of $6 per kg Hilsa with the duty-free facility.

Emy Enterprise, C&F agent of exporter Aquatic Resort, said they were directed to export 500 tonnes of Hilsa fish in turns by October 10.

Hilsa has been ruling the hearts of the Bengalis for generations. The high demand has led to over-fishing and the catch has been decreasing steadily and alarmingly over the past decade.

But on Aug 1, 2012, the government banned the export of Hilsa and other species of fish following local business leaders’ call to control fish prices. The ban on all fish except Hilsa was lifted on Sept 23 of that year.

During her visit in 2015, West Bengal Chief Minister Mamata Banerjee urged Prime Minister Sheikh Hasina to lift the ban, but Hasina replied India should ensure a fair share of the Teesta river water by striking a deal first if they wanted Hilsa.

In January last year, the then fisheries and livestock minister Narayon Chandra Chanda Chanda said the government would lift the ban on Hilsa export to ‘stop smuggling’.

Though the ban is in effect, Hilsa fish were being smuggled out of the country, leading to a huge loss in taxes, he had said.

Large Hilsa fish are smuggled out of the country and are thus rarely available in the domestic market, he had argued.

Hilsa fish make up nearly 11 percent of fish produced in Bangladesh. The fish also contributes 1 percent to the country’s GDP.

Nearly 75 per cent of world Hilsa production occurs in Bangladesh. The fish provides direct and indirect employment to 2 million people.