Painting by feet, Monaem dreams of becoming an engineer 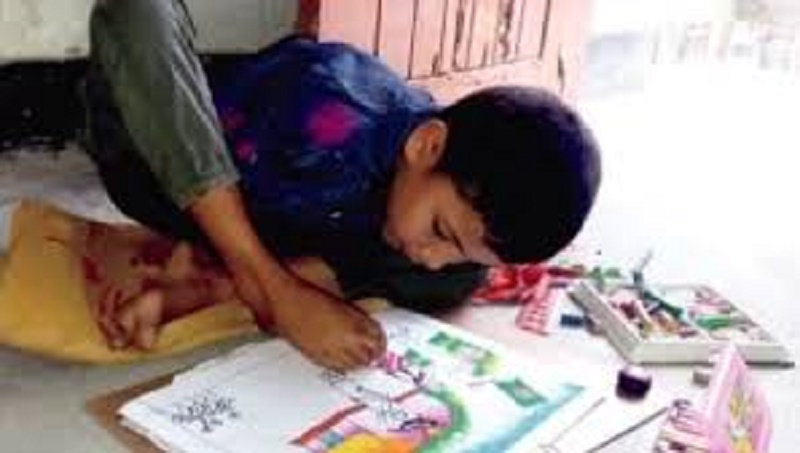 Despite having no hand since his birth, Monaem, a class-three student of a school here, excelled in painting by resorting to art using his feet.

Bibi Kulsum, mother of the child, said Monaem, who attends Dagonbhuiyan Academy of the district, is performing well in painting using his feet as he has no hand since birth.

Monaem, son of Kamal Uddin of village Enayetnagar under Yakubpur Union of Dagonbhuiyan Upazila, is the eldest among two brothers.

“Even being disabled for having no hands since birth, he earned prominence also in painting,” said Kulsum.

Md Saiful Islam Bhuiyan, UNO of Dagonbhuiyan Upazila, said he hoped that the child would be successful in the workplace after completing higher education by overcoming his disability. “Physical barrier is not an impediment and Monaem is a shining example in this regard,” he pointed out.

Besides, Monaem got position on merit list in his class and won awards one after another. His parents and family members were upset after seeing that their son was born without two hands. However, mother Bibi Kulsum raised him with extra care and affection.

The parents got their son Monaem admitted to school at the age of six and since then the child started performing better. He started taking class notes using his two feet.

Alongside academic studies, he used to take part in cultural competitions. Seeing his interest in painting, Kulsum admitted her son to Uzzibok Art School. Indomitable Monaem was selected for taking part in a national competition after obtaining best awards at district and upazila levels.

Monaem said, “My family is happy over such successes. I dream of becoming an engineer in the future.”