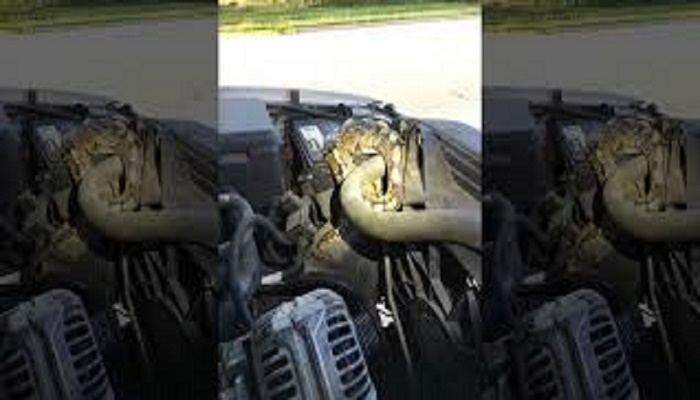 A police officer in Michigan, US, has been hailed as extremely brave for their actions.

A post shared on Facebook details how the cop found and subsequently removed a python from inside a car’s engine. The post has collected a ton of reactions since it was shared on Facebook, reports Hindustan Times.

“This is probably NOT the kind of call Officer Fettig expected to take tonight…” says the post shared by Shelby Township Police Department on Facebook. The post is complete with a video of the cop pulling the snake out of its hideout.

“Oh, and is anyone in the area of Hamlin and Ryan missing their pet Python?” the post says further along with hashtags #CantMakeThisStuffUp, #TheEngineIsMakingAWeirdNoise and #NopeRope.

While the video does feature a pet, it’s hard to forget it is actually a snake. The clip shows the cop moving the snake out of the engine and placing it inside a container.

“I heard of squirrels under the hood and a cat once, but that’s the 1st python!” says a Facebook user. “Adorable snake!” says another. “Nope. Nope. Nope. Braver than me!” says a third. “Oh my goodness! I don’t care if you choose to have a pet python but please for the sake of my heart, keep it in a cage so it can’t get out. If I found this in my car I would have had a heart attack,” says another.