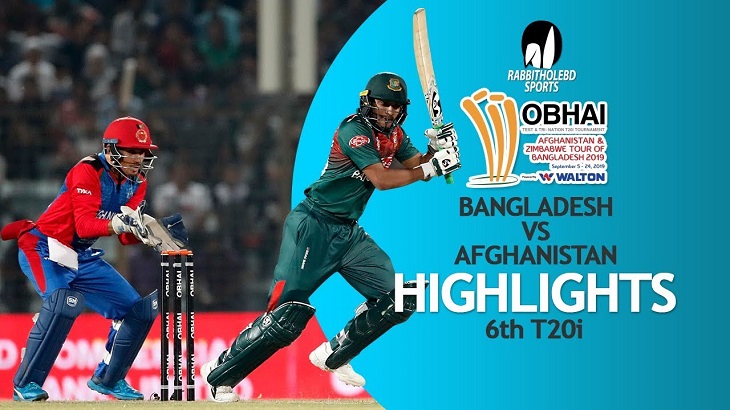 Bangladesh is determined to come all guns blazing to clinch their first T20 trophy in their history as they take on Afghanistan in the final of the tri-nation series at Sher-e-Bangla National Cricket Stadium on Tuesday.

This will be overall Bangladesh’s eighth final and third in T20 format. While they ended their ODI trophy draught in last May, beating West Indies by five wickets in a tri-series tournament in Ireland just ahead of the World Cup, Bangladesh is now looking to rewrite the record book of T20 as well. And this is also a tri-series tournament in which Zimbabwe was the third team.

For the first time in their history they moved to the final in any kind of T20 tournament involving three or more teams was Asia Cup in 2016, which was played by T20 format due to that year’s World T20 in India.

Bangladesh romped to the final, beating the likes of Pakistan, Sri Lanka but just couldn’t stop the Indian juggernaut in the final and lost the match by eight wickets.

India also frustrated them in Nidahas Trophy T20 final in Sri Lanka in 2018 when they beat them by four wickets in a nervy clash.

This time there is no India. Bangladesh also has gained a psychological edge by beating Afghanistan by four wickets in the last match at the group stage. This four-wicket victory ended Bangladesh’s four-match losing streak to Afghanistan.

They also moved to the final by being group champions with three wins in four matches.

But overall the two teams met six times in T20 cricket and Bangladesh won just two in contrast of Afghanistan’s four. With Bangladesh winning the last match against Afghanistan and the visitors also tasted two defeats in a row in the group phase, the hosts are considered to be favourites in the final.

Moreover, it is certain as yet that the visitors will get the service of their captain Rashid Khan, the tormentor of Bangladesh. Rashid Khan sustained a hamstring injury in the last match against Bangladesh and though he came back to the game, the injury looked serious to some extent.

Rashid though said that he would play the final if he is even 10 per cent fit.

However, Rashid Khan is not in Bangladesh’s mind and they even didn’t give it a thought that Afghanistan could beat them in final if the players’ version is taking into consideration.

While Bangladesh all-rounder Mosaddek Hossain Saikat earlier said that they had never fear to play against Rashid Khan, another all-rounder Mohammad Saifuddin even went to say that they could beat Afghanistan if they can give their just 60/70 per cent.

The confidence came after ending the win-jinx against Afghanistan indeed.

But Bangladesh coach Russell Domingo was careful in his approach unlike the players. He admitted that Bangladesh is yet to play the perfect cricket and urged the players to bring up their A game in the final.

“We haven’t played the perfect game of cricket as of now in the tournament,” said Domingo.

“We lost too many wickets in first 10 overs, so big focus for us to try to go to over number 15 with 2 wickets down and that will help us exploit the last 5 overs, so that’s one area we are focusing on.”