Quader asks BCL not to hit news headlines for wrongdoings 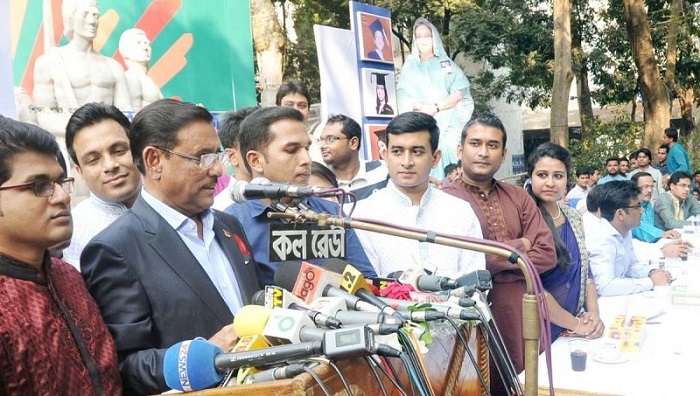 Awami League General Secretary Obaidul Quader on Monday asked the leaders and workers of Bangladesh Chhatra League (BCL) to make their way for not being news headlines for wrongdoings.

Obaidul Quader also the Road Transport and Bridges Minister came up with this observation while addressing a programme at Nabab Nawab Ali Chowdhury Senate Bhaban on Dhaka University (DU) campus.

“Bangladesh Chhatra League leaders and workers should not be embroiled in getting headlines for bad activities rather they should be subjects for news items for positive doings,” Obaidul Quader said.

The AL sub-committee on relief and social welfare arranged the programme to mark the 73rd birthday of Prime Minister Sheikh Hasina.

To mark the birthday, a total of 73 students of DU Bangla Department were given scholarships at the function. The premier is an alumnus of the department.

Quader asked the BCL men to do politics imbibing with the ideology of Father of the Nation Bangabandhu Sheikh Mujibur Rahman, who dreamt of building a society free from corruption, deprivation and injustice.

The AL general secretary said BNP is a self-confessed corrupt party as it scraped the section 7 of the party constitution to allow corrupt persons to be the party leaders.

Quader said BNP had established ‘Hawa Bhaban’ which was designed to establish a reign of corruption and malpractices.

Blaming BNP for not taking steps against corrupt people, he said, the Awami League is now taking actions against corrupt, extortionists and tender manipulators. None will be spared for wrongdoings, he added.

Quader said politicians are usually seen to ponder over the next election but Prime Minister Sheikh Hasina thinks for the betterment of next generation.

He said the countrymen will remember two personalities forever; one is Bangabandhu Sheikh Mujibur Rahman for liberating the country and other is Prime Minister Sheikh Hasina for earning economic emancipation for the people.