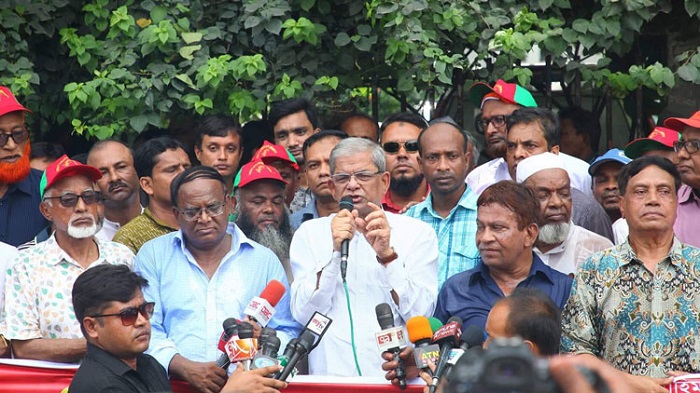 The BNP leader told this to journalists after visiting injured Jatiyatabadi Chhatra Dal (JCD) leaders and activists, who were allegedly attacked by the BCL cadres on the Dhaka University campus on Monday, in a city hospital.

Condemning the attack on JCD on the Dhaka University campus, Mirza Fakhrul Islam Alamgir said it is an ominous sign for politics.

“When Chhatra Dal is trying to come up with positive student politics with a fresh vigour following its successful council, the Bangladesh Chhatra League (BCL) cadres attacked its president, secretary and other leaders and activists. This is not only a condemnable incident but also an ominous sign for Bangladesh politics,” Fakhrul said.

The BNP leader demanded the government take immediate action against those involved in the attack.

At least 11 leaders and activists of BNP’s student wing JCD and three journalists were injured in an attack on the Dhaka University campus today.

Fakhrul said Chhatra League is trying to spoil Chhatra Dal’s efforts to create a new chapter in student politics. “Both the Awami League and Chhatra League are terrorist organisations.”

He said the media have been running news about the misdeeds of the ruling party men for the few days. “People also witnessed an example of their terror acts today (Monday) through the attack on JCD leaders and activists.”

Fakhrul hoped JCD will play an active role in student politics and the movement for the release of BNP chairperson Khaleda Zia from jail.

“We think the terrorists can never win, and they will surely be defeated by the Chhatra Dal leadership,” the BNP leader said.