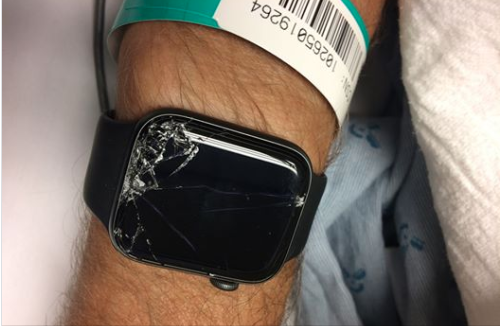 An Apple Watch has been credited for saving a man’s life. In a post shared on Facebook, a Spokane, Washington resident has detailed how his father’s Apple Watch not only detected his fall during a biking trip but also alerted emergency services about the accident. The post, shared on September 20, has gone viral all over the Internet.

In his post, Facebook user Gabe Burdett details how he and his dad, Bob, were meeting for some mountain biking. However, moments before reaching him, Gabe received a text from his dad’s Apple Watch telling him it had “detected a Hard Fall”. The device also shared a location for his father.

When Gabe reached the location, he realised his father wasn’t there. Another update from the watch explained Bob’s location had changed to Sacred Heart Medical Center.

“Dad flipped his bike at the bottom of Doomsday, hit his head and was knocked out until sometime during the ambulance ride. The watch had called 911 with his location and EMS had him scooped up and to the hospital in under a 1/2 hr,” says Gabe in his post. He adds that his father is ‘doing great’ and his scans are all clean.

Burdett goes on to say that everyone must set up the ‘HARD FALL detection’ feature on their devices. “Had he fallen somewhere on the High Drive trails or another remote area, the location would have clued EMS in on where to find him,” he says in his post.

The post has gone all kinds of viral collecting over 5.2 lakh reactions and more than 4.6 lakh shares - and still counting.