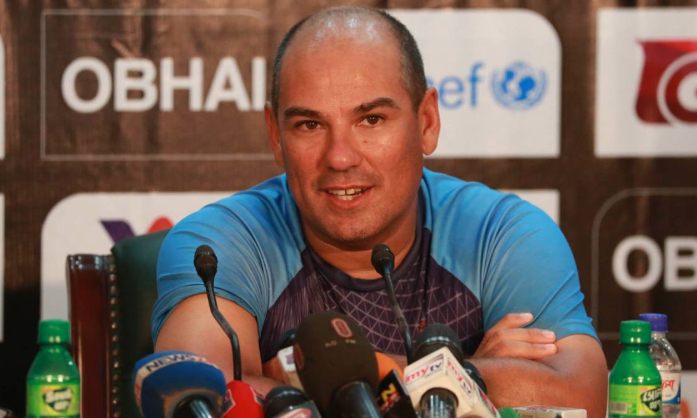 Bangladesh will seek to lift the trophy when they meet Afghanistan in the final of the Tri-Nation T20I Series at Sher-e-Bangla National Cricket Stadium on Tuesday with a pace-oriented bowling attack.

The final will kick off at 6:30pm. Gtv will telecast the match live.

Right before the final, Bangladesh beat Afghanistan in Chattogram, which was the second consecutive defeat for the Afghans. Despite that win, Head Coach of Bangladesh Russell Domingo thinks they should put their best foot forward to win the game.

“We know that Afghanistan is a good side but if we play according to our potential, we can beat anybody. The challenge for us is to get our skills and mindset in place to beat teams like Afghanistan,” he said while addressing a pre-final press conference at Sher-e-Bangla National Cricket Stadium on Monday.

In the last game, Bangladesh ended their long drought of winning a T20I game against Afghanistan riding on the half-century by the captain Shakib Al Hasan. Now the Tigers have the chance to beat Afghanistan in back-to-back T20I matches.

In the first match against Afghanistan in the league-phase of the event, Bangladesh suffered a defeat. That was a result of the poor show from the top-order batsmen of the hosts.

In the last two games, Bangladesh prioritised Najmul Hossain Shanto in the place of Soumya Sarkar to open the innings with Liton Das, but the youngster failed to come up with an impressive performance. However, Domingo looked reluctant to withdraw his faith from Shanto.

“He is a young player and I have been very impressed with what I have seen, the way he carries himself, the way he trains and fields. Sometimes it is more than just runs and wickets. He provides us with an unbelievable work ethic and attitude which is important,” Domingo said when he was asked about Shanto.

In his debut against Zimbabwe, Shanto scored 11 and in the next game, he posted five. In both games, he never looked to be comfortable in the middle.

Bangladesh will miss the service of the young leg-spinner Aminul Islam Biplob in the final as they did in the last game. The 19-year-old lad is suffering from an injury to his hand.

Domingo confirmed that the Tigers are planning the final keeping Aminul out of the probable XI.

Instead of selecting injured Aminul in the playing XI, Bangladesh are planning to include four pacers in the arsenal.

“I think we are going to add a fourth seamer to our 12 and make a decision tomorrow (Tuesday), looking at the wicket. It is an area we can exploit if there is more pace and bounce. But it is (playing four pacers) definitely something that we can consider,” Bangladesh head coach added.

Afghanistan, on the other hand, are also thinking to win the final at Sher-e-Bangla as their captain said the pre-final press conference.

“I think the way we have been playing cricket for the last three or four years, especially in T20Is, if we play our best cricket, we can beat any team in the world. I think we have talents and skills. We will have to just keep calm and perform accordingly,” Rashid Khan told the media.

However, Rashid is not 100 percent fit to play the final as he has been suffering from hamstring injury on his left leg that he has sustained in the last game against the hosts in Chattogram.

“I cannot say anything (about participation in the final) right now. But I’m doing well now. I hope I can make to the final tomorrow,” he further added.

Both of Bangladesh and Afghanistan are hoping for a trophy. The weather update is saying the rain can ruin the game as there is much possibility of rain from 5pm to 11pm.

Before heading to this game, Bangladesh won only one multi-national event before the World Cup in England earlier this year.