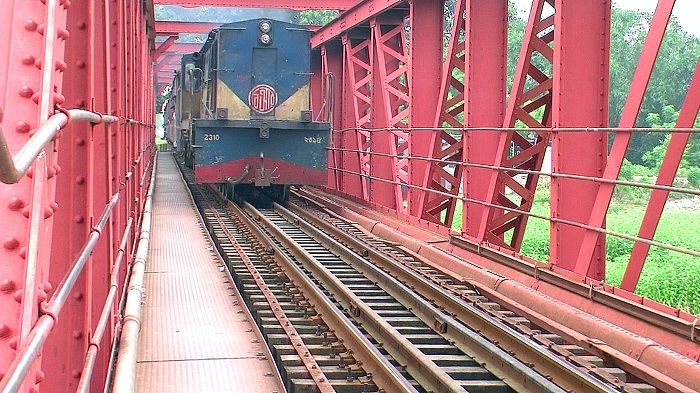 Nearly 90 years past its expiry date, the Teesta Rail Bridge, connecting Lalmonirhat and Kurigram, continues to be in operation with its pitiable state.

The historic bridge, a shell of its former self, is crossed every day by 18 trains.

Built in 1834 by the Northern Bengal State Railway to connect Lalmonirhat and Kurigram, the 2,110 feet bridge was supposed to be in operation for 100 years.

It has been nearly two centuries since then but railway’s Lalmonirhat Divisional Manager Muhammad Shafiqur Rahman insisted that the bridge is not risky yet.

A visit to the site revealed the sorry state of the bridge. Most of the wooden sleepers on the bridge are damaged and many rail-track clips have been stolen.

Woods used in the Teesta Rail Bridge have started rotting and at many places, there are no iron plates on sleepers. Although the fishplates are supposed to have four bolts, some have only three.

Ironically, the railways officials are yet to notice the situation.

Railways Minister Md Nurul Islam Sujan recently said the government will plan a new bridge beside the risky Lalmonirhat bridge once a new connection is established through Burimari land port.

The railway officials agreed that the bridge’s condition was serious but they claimed its longevity was a testament to British engineering.

Trains are hugely popular in Bangladesh and it is often the people’s preferred mode of travel. But the dilapidated condition of routes sometimes causes accidents.

Five people were killed when six coaches of Dhaka-bound ‘Upaban Express’ fell off the tracks on June 23 after a culvert over the Barochhara Canal, near the Baramchal Railway Station, caved in.

Although media reports have highlighted the sorry state of various bridges, the authorities concerned apparently took no action to address the issues.

Prime Minister Sheikh Hasina on June 25 ordered conducting a survey of rail bridges and culverts across the country and repair those damaged or risky.

“Although the Teesta Rail Bridge is past its expiry date, it is not risky,” he insisted. “We’ve plans to build another double broad-gauge bridge on the western side.”

But locals are not convinced. “Trains are crossing this risky bridge every day and we’re in constant fear of accidents,” said Rafiqul Islam, a local.

“The authorities concerned must make a move before a major accident takes place.”