607 Puja mandaps to be erected in Gaibandha 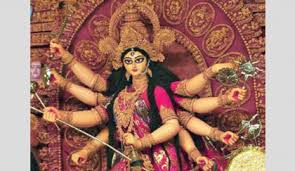 A total of 607 Puja mandaps will be erected for the Sharodiya Durga Puja, the biggest religious festival of the Hindu Community, in all the seven upazilas of the district this year.

This was disclosed by general secretary of Bangladesh Puja Udjapon Parishad, district unit, Dipok Kumar Pal to the correspondent of the national news agency here this morning.

The five-day long Puja would begin from October 04 and conclude on October 08 through the immersion of idols at different water bodies including canal, pond and rivers, he added.

In reply to a query Dipok Kumar Pal said a preparatory meeting to hold the Durga Puja in the district peacefully was also held at the conference room of superintendent of police (SP) here on Sunday.

In the meeting, SP Muhammad Towhidul Islam urged the Hindu Community to celebrate the festival with much enthusiasm and religious fervor in the district and assured them of taking necessary steps in this regard.

Police, ansar and VDP members including gram police would be deployed at the Puja mandaps each and the elite forces RAB would also patrol on the road to hold the Puja here smoothly, the SP added.

Stern and lawful action would be taken against the persons who would be involved in creating anarchy and trouble at the time of Puja, the SP warned.

The leaders of district and upazila Puja Udjapon Parishad, and all the officers in charge (OCs) including the journalists attended the meeting, said OC of Sadar Thana Khan M. Shahriar.