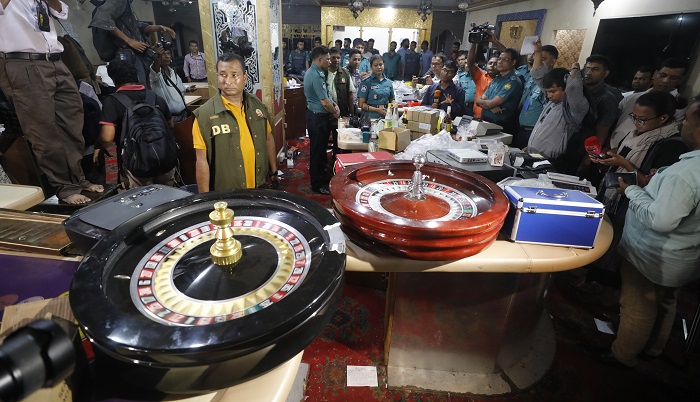 A large number of Nepalese nationals worked in league with some 50 dons, most of them influential ruling Awami League leaders, who controlled the sporting clubs-turned-casinos now under the government’s anti-corruption scanner with many already raided for illegal activities.

Security sources told the daily sun that these mafias copied casinos in Singapore, Malaysia, Thailand and Nepal to set up their business in Bangladesh and hired skilled professionals from Nepal to operate modern electronic gambling boards.

A daily sun investigation found the names of 9 Nepali nationals who operated the casinos on the basis of partnership. From 2015, they have been entering Bangladesh on tourist visas.

The nine Nepalese nationals are Vinod Manali, Ajay Pakarel, Dinesh, Rajkumar, Pradeep alias Suresh, Helmi, Krishna Thapa, Maliki and Chota Rajkumar. They are all partners of the casinos in Dhaka.

In addition, about 20 other Nepalese and other nationals worked in the Dhaka casinos with each being 1000 US dollars as per monthly wages.

These mafia dons erased healthy sporting activities from sports clubs and turned them into a crime zone. As the darkness fell, the club turned into a haven for all kinds of wrongdoing where the mafia dons, gamblers and beautiful ladies gathered to while away time gambling or taking drugs.

Although these mafias belonged to the ruling party, some belonged to the opposition Bangladesh Nationalist Party (BNP) politics but changed their allegiance with the change in regimes making it to leadership positions.

They earned huge amount of money daily from the casinos and laundered most of it abroad using different methods.

Competent sources said “Every night, around Tk 70 to 80 crore exchanged hands in the roulette of the clubs of Dhaka. Of this, the owners had an average profit of Tk 50 crore. About 40 percent of the money would go to Nepali citizens and a large portion of the money was given to police and political leaders.

Talking to some of the intelligence officials and casino employees, this correspondent found that nine Nepalese nationals, who had experience in such business, in different countries and operated the casinos in Dhaka on the basis of partnership.

They come to Bangladesh on a tourist visa and run casino businesses under the protection of influential political leaders.

The revenue of casinos in Dhaka was being smuggled abroad in various ways. First, the foreigners working in the casinos used to smuggle money into their own country from their salaries and earnings from a partnership.

Secondly, many owners of casinos regularly went to Singapore, Dubai and Bangkok for gambling and spend huge amounts of money. Third, the casino money was laundered to a number of top terrorists hiding abroad from the law.

Police officials said gambling was practiced in these clubs for a long time. But no specific details were available on how they did start the business.

However, some officials associated with the clubs reported that gambling was practiced in nearly all the clubs, including Abahani - Mohammedan.

That was done primarily to finance the management of the club. At that time the organizers of the club were not very active in politics but there was intense competition among the clubs. As a result, the clubs did very well in the sport.

Multiple casino sources said that setting up gambling rooms in the sporting clubs of the Motijheel area in Dhaka is a long-standing phenomenon. During the rule of the BNP government, domestic gambling spread greatly in the clubs.

However, in the modern gambling casino revolution was happed from 2015 by Ismail Hossain Chowdhury, the president of the Jubo League Dhaka (South) unit.

Sources said all the casinos had huge security. Casino visitors had to pass three levels of security checking and answer questions at the entrances.

A huge amount of money, including the salary of Nepal people working in casinos and the casinos' partner of Nepalese citizens, would go out of the country every month.

RAB Executive Magistrate Sarowar Alam said “We found some foreign citizens engaged in operating the casinos. We are investigating if they have work permits in the country or the kind of work permits they have.”

Airport immigration sources said Jubo League leaders have a record of going abroad at least once every two months. This fact will be found by searching for the passports of those leaders. Most of their destinations were Singapore, Dubai, Bangkok and Malaysia.

According to intelligence sources, Khaled Mahmud Bhuiyan, the Jubo League leader arrested by the RAB, told detectives that he sent a large portion of the casino’s income to several top terrorists living abroad. Among the top terrorists, Khaled said one of them was Jisan, who was currently based in Dubai and carrying an Indian passport.