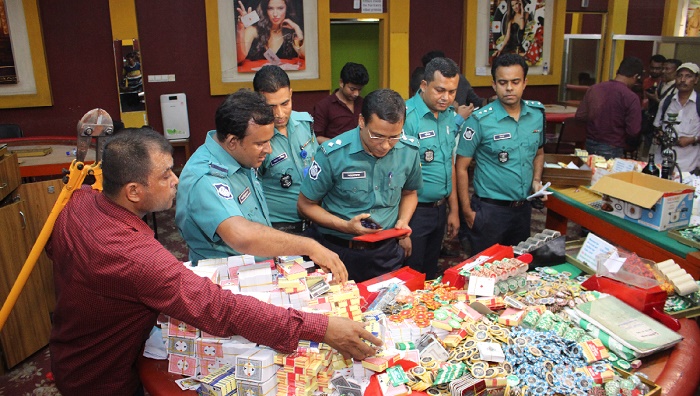 Deputy Commissioner of Dhaka Metropolitan Police (Motijheel Division) Anwar Hossain said they raided the clubs after another from around 3pm.

During the drives that continued till 4:45pm, they recovered various instruments for playing gambling, Tk 1 lakh and some empty bottles of liquor, he said.

They had been unaware of any casino in the clubs, Anwar said, adding that they conducted the drives based on a tip-off.

Law enforcers have recently started hunting down the dens of gambling and drugs across the country.

The elite force of Rab detained 142 people from a casino at Fakirerpool Youngmen’s Club in the capital on Wednesday.

Later, they arrested its president Khalid Mahmud Bhuiyan, also organising secretary of Dhaka South city unit of Jubo League. He, however, expelled from the organisation.

Besides, three other casinos in Banani, Motijheel and Gulistan areas were sealed off, and 40 more people detained from another casino.

Rab members arrested Golam Kibria Shamim alias GK Shamim along with illegal firearms and a huge amount of money from his Niketan office in the capital on Friday afternoon.

“A foreign-made pistol, seven shotguns and a huge cache of bullets were also seized from the office of GKB & Company Pvt Limited, owned by Shamim. The firearms were allegedly used in extortion and tender manipulation,” the executive magistrate said.