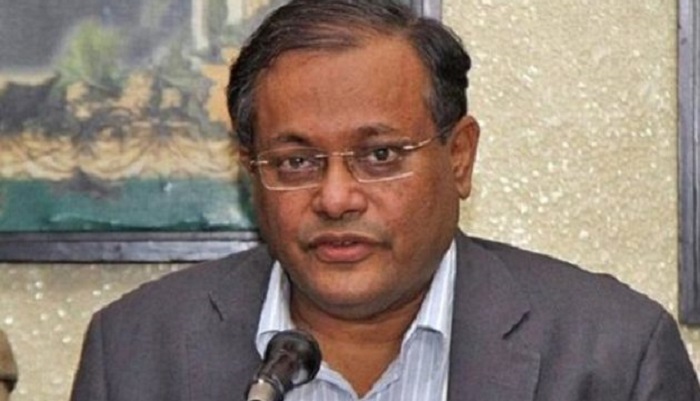 Reiterating the government’s stance against corruption and irregularities, Information Minister Dr Hasan Mahmud on Sunday said tougher actions are being taken against all corrupts irrespective of political identity.

“BNP should give thanks to the government for this stance and the ongoing drive which was not absent during their regime. Rather, BNP gave corruption as an institutional shape,” he told journalists before a meeting with the artistes of Bangladesh Television (BTV) and Bangladesh Betar at the meeting room of his ministry.

State Minister for Information Dr Murad Hasan was present in the meeting.

Dr Hasan said BNP’s acting chairman, a fugitive convict in different cases, was a ‘python’ and he swallowed everything. “The acting chairman began the system of 10 percent commission for every business of the state. Bangladesh became champion in corruption for five times during the BNP’s tenure,” he added.

The minister said Prime Minister Sheikh Hasina is moving ahead with ‘zero tolerance’ policy against irregularities, corruption and drugs.

“Now the government is taking actions wherever corruption is found. For this, BNP should be happy and give thanks to Prime Minister Sheikh Hasina for her tough stance. And they should be ashamed for their failure. BNP has no ethical right to speak on this issue,” he said.

The information minister said the pro-liberation force Awami League is in the government in three consecutive terms. “Some outsiders have entered the party at different levels and also in the front organizations. Work for identifying the outsiders is going on. The party would take steps against the outsiders after identifying,” Dr Hasan continued.

In the meeting, Dr Hasan said the role of artistes in every democratic movement including the War of Liberation is unique. The artistes had played a vital role when the military rulers had gagged democracy after the assassination of Bangabandhu in 1975, he added.

The minister said, “Now, we have a dream under the dynamic leadership of Prime Minister Sheikh Hasina to become a middle-income country by 2021 and a developed nation by 2041. We also need to make a humanitarian nation along with infrastructure development. For this, the role of the artists is must.”

The minister assured the artistes of increasing their honorarium.

Dr Hasan said the BTV began its journey in 1964. Earlier this state owned television was not seen in other countries. “But, now the people of India is able to see BTV and it was possible only for Prime Minister Sheikh Hasina’s dynamic and prudent leadership,” he added.

The information minister said the government is taking steps to restart some favorite programmes of BTV like ‘Natun Kuri’ and debate competition.

The minister also talked about his recent visit in India to the journalists.

He said, “I had meetings with the chief ministers of Tripura and Meghalaya states. The both chief ministers have agreed to set up sculpture of Father of the Nation Bangabandhu Sheikh Mujibur Rahman in their respective states marking the birth centenary of Bangabandhu.”

“I also discussed about the rail connectivity between Bangladesh and Tripura. I also visited a spot where the construction works of the railway connectivity is going on in full swing,” the minister said.

Dr Hasan said, “During the visit, I also attended a discussion at Kolkata Press Club (KPC) marking the 75th founding anniversary of the club.