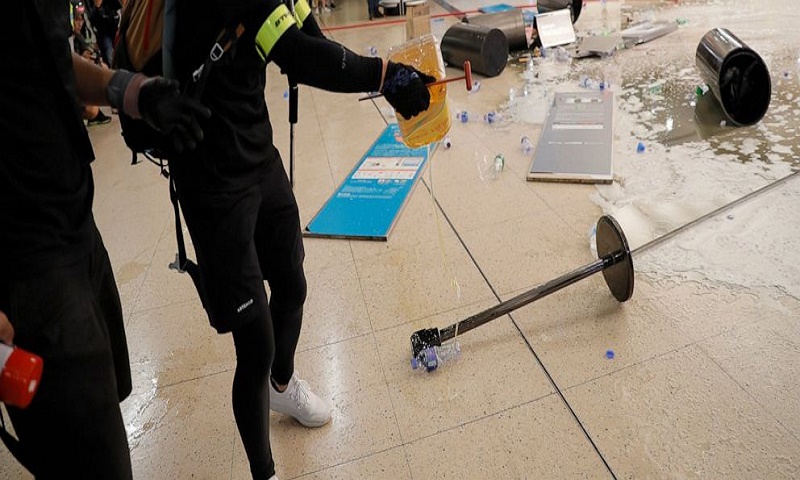 Protesters in Hong Kong trampled a Chinese flag, vandalized a subway station and set a fire across a wide street on Sunday, as pro-democracy demonstrations took a violent turn once again.

The day's action began peacefully, as protesters filled a shopping mall and, in a new twist, folded paper "origami" cranes that they tied onto a large rigging that they assembled in the mall in the Shatin district, reports AP.

Some put a Chinese flag on the floor and took turns running over it, before defacing it and putting it in a dumpster outside, which they then pushed into a nearby river.

One group later attacked the Shatin subway station, which is connected to the mall. They jumped up to smash overhead surveillance cameras, used hammers to knock ticket sensors off gates and spray-painted and broke the screens of ticket machines, using umbrellas to shield their identities.

Riot police arrived following the attack and guarded the station after it was closed, with a metal grill pulled down to block entry.

Protesters then built a barricade across a street near the mall, piled what appeared to be brown palm fronds on top and set them on fire.

Police fired tear gas as they tried to advance on the protesters, who had retreated before taking a position behind a wall of umbrellas that those in the front held.

Hong Kong's pro-democracy protests, now in their fourth month, have often descended into violence late in the day and at night.

Before making the origami cranes, protesters at the Shatin New Town Plaza mall chanted slogans and sang a song that has become their anthem, backed by a small group playing on woodwind and brass instruments through their masks. Many lined the balustrades of the three higher floors overlooking where others gathered in the wide space below.

Hong Kong's leader, Chief Executive Carrie Lam, has agreed to withdraw an extradition bill that sparked the protests in June. But the anti-government protesters are pressing other demands, including fully democratic elections in the semiautonomous Chinese territory and an independent investigation of complaints about police violence during earlier demonstrations.