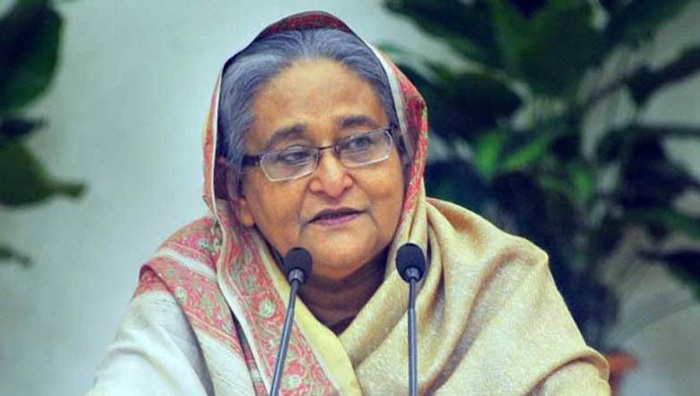 Prime Minister Sheikh Hasina left Abu Dhabi on Sunday for New York to attend the 74th UN General Assembly after making a stopover in the UAE.

The Prime Minister is scheduled to reach John F Kennedy International Airport at 4:40pm on Sunday local time (2:40am BdST on Monday).

Mohammad Ziauddin, the Bangladesh Ambassador to the USA, and Masud Bin Momen, Ambassador and Permanent Representative of Bangladesh to the UN, will welcome her at New York.

On September 23 (Monday), Hasina along with Spanish Prime Minister Pedro Sanchez will co-chair the multi-stakeholder panel to be held in parallel to the High-level meeting on Universal Health Coverage at ECOSOC Chamber, UNHQ.

She might address the high-level meeting on Universal Health Coverage, the Climate Action Summit 2019, and attend Recognising Political Leadership for Immunisation in Bangladesh to be organised by GAVI in the UNHQ.

On September 24, the Prime Minister will hold a bilateral meeting with her Indian counterpart Narendra Modi at the Lotte New York Palace Hotel.

She will have a meeting with Queen Maxima, UN Secretary-General's Special Advocate for Inclusive Finance for Development, at the UNHQ, attend a side-event to be hosted by Global Commission on Adaptation at the UNHQ and the Luncheon hosted by the UN Secretary General at North Delegate’s Lounge.

She will also attend the high-level side-event on the situation of Rohingya minority in Myanmar, organised by the Permanent Mission of Bangladesh and the OIC Secretariat at the UNHQ, Leadership Matters-Relevance of Mahatma Gandhi in the Contemporary World at ECOSOC Chamber in the UNHQ, and the Reception by the President of the United States, Donald Trump, at Lotte New York Palace Hotel.

On September 25, Sheikh Hasina will co-moderate leader’s dialogue 4 on ‘Localising the SDGs’ at the High-level Political Forum on Sustainable Development (SDGs summit) at the UNHQ, join an interactive dialogue titled 'A conversation with Prime Minister Sheikh Hasina' to be arranged by the Council on Foreign Relations and attend dinner at the Bangladesh House.

On the same day, she will likely hold a meeting with former Australian prime minister and Chair, Sanitation and Water for All Kevin Rudd at Lotte New York Palace Hotel.

On September 27, Sheikh Hasina will attend the high-level side-event on ‘Sustainable Universal Health Coverage: Comprehensive Primary care inclusive of mental health and disabilities’ to be organised by the Permanent Mission of Bangladesh at the UNHQ and address the 74th Session of the General Assembly of the United Nations.

On September 28, she is scheduled to attend a press briefing at the Permanent Mission of Bangladesh in New York in the morning, attend a reception accorded to her by the Bangladesh community in New York at Hotel Marriott Marquis in the afternoon, and hold a bilateral meeting with UN Secretary General António Guterres at the UN Secretariat in the evening.