Stakes are high for Ukraine's comedian-turned-politician 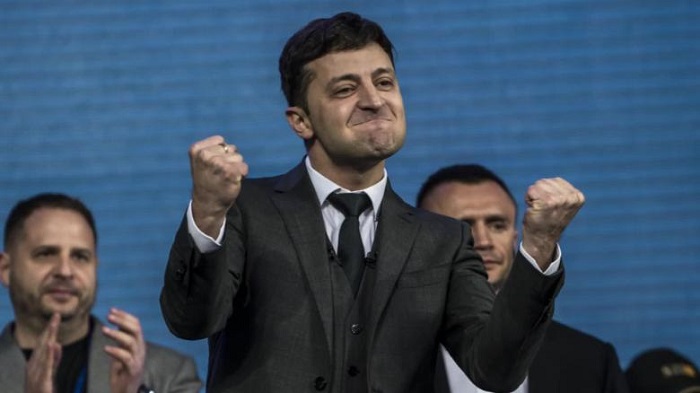 Ukrainian President Volodymyr Zelensky does not have an easy job. Ukraine is one of the poorest places in Europe, his country faces a steady outflow of capital and a proxy war with Russian-backed insurgents has settled into a bloody stalemate.

Ukraine became the center of a massive US political scandal on Friday, when it emerged that President Donald Trump had pressed Zelensky in a July 25 phone call to investigate Hunter Biden, the son of Democratic presidential candidate Joe Biden, a person familiar with the situation said. That phone call is entwined with a whistleblower complaint submitted to the Intelligence Community Inspector General, according to the source. The whistleblower controversy has spurred fresh calls for Congress to start impeachment proceedings against the President.

Joe Biden in turn has dismissed Trump's unproven claims that Biden and his son had acted inappropriately in their dealings with the Ukrainian government during Biden's time as vice president. "Not one single credible outlet has given any credibility to his assertion," Biden said Friday. "Not one single one, and so I have no comment except the President should start to be president."

There is no evidence of wrongdoing by either Joe or Hunter Biden.

On Saturday, Trump again defended the call to Zelensky, dubbing criticisms of it a "Ukraine Witch Hunt."

The revelations come just days ahead of Zelensky's debut on the world stage. On Monday, the Ukrainian President travels to the US to take part in the UN General Assembly, where he's scheduled to meet Trump on the sidelines.

What could possibly go wrong?

For Ukraine, the stakes are high. The former Soviet republic depends heavily on international support to prop up its economy following Russia's annexation of the Black Sea peninsula in 2014 and a war with Russian-backed separatists in the eastern Donbas region that has cost around 13,000 lives. A $3.9 billion standby loan expires next year, and an IMF team is currently in Ukraine to discuss a new loan program to keep the country afloat.

In New York, Zelensky will need to persuade the international community that he is serious about tackling the corruption and poor governance that have deterred investment and stunted Ukraine's economy.

He will also likely appeal to other world leaders for solidarity and support in Ukraine's ongoing conflict with Russia. The US and the European Union have kept economic sanctions in place on Moscow since 2014, but there are signs that international resolve is beginning to waver.

Trump, for instance, has suggested that it would be appropriate for Russia to rejoin the G7 after it was suspended over the annexation of Crimea. French Foreign Minister Jean-Yves Le Drian recently told reporters that "the time is right" for reconciliation between the EU and Moscow.

Zelensky has scored some early successes in dealing with his powerful neighbor in Moscow. He and Russian President Vladimir Putin were recently able to negotiate the release of 35 Ukranian prisoners and 35 Russian prisoners, a move that could ease tensions between the two countries.

But Ukraine desperately needs military assistance. Russia has covertly supplied rebels in the Donbas region with advanced weaponry, and Moscow has even sent its military advisers, something Russian President Vladimir Putin has only winkingly acknowledged.

US military aid to Ukraine has recently been in question, however. Recently, the Trump administration lifted a hold it had placed on $250 million in Ukraine defense assistance.

Aid to Ukraine enjoys bipartisan support in Washington: lawmakers were prepared to vote on a measure that would have forced the administration to release the funds. But critics of the Trump administration pointed to what they described as a pattern: The US President inexplicably doing another favor for Putin.

It now remains to be seen how Zelensky will handle a transactional Trump. After all, amid this latest scandal over the phone call, Trump continues to insist that someone should look into Biden.

For some Ukraine observers, the Biden-Ukraine saga is a zombie political story that refuses to die. But Zelensky will have to tread carefully, as he risks infuriating either Trump, or a democratic political challenger who may succeed him.

Thus far, his administration's response to the scandal roiling Washington has been very measured and careful.

A readout of the July 25 phone call released by the Ukrainian presidential administration said Trump was "convinced that the new Ukrainian government will be able to quickly improve image of Ukraine, complete investigation of corruption cases, which inhibited the interaction between Ukraine and the USA."

That is the major irony here: Zelensky, who once played the role of an accidental president in a TV series called "Servant of the People," came to office on a promise to get rid of corruption. Now he is caught up in a political script that is being written in Washington.