How are the Biharis of Mirpur? 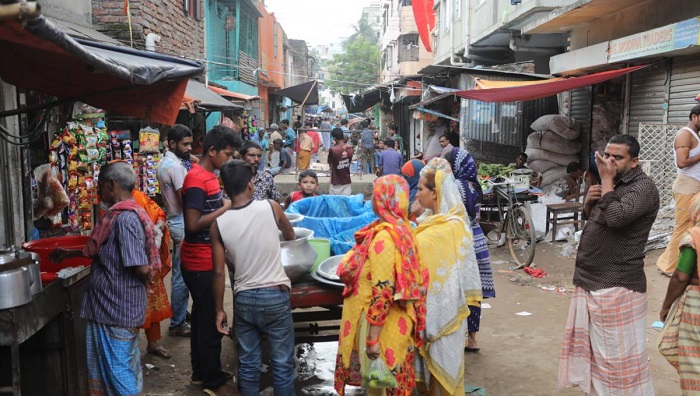 A single room with damp and cracked walls for a family of six to ten; inadequate water supply; unhygienic sanitation and cramped passageways -- this scenario is replicated in every other ‘camp’ across Mirpur, where almost 80,000 stranded Urdu-speaking people, otherwise known as ‘Biharis’ live. Even their these limited facilities may be taken away as they now face the threat of eviction.

After the Liberation War, the Bihari community was confined to different colonies across the countries, most of which took shelter in the ‘Geneva camp’(so-called since their legal status is accorded by the Geneva Convention) in the capital’s Mohammadpur area.

According to various estimates, there are 300,00 to 450,000 Biharis living in secluded camps across Bangladesh, more than half of them in Dhaka.

Visiting the camps across Mirpur 11, the UNB correspondent witnessed the awful conditions and poor living standards of the Bihari community which in a word can be described as horrendous. A huge crowd to collect water from solitary water pumps is a regular affair while the sewage-line is a mess.

Sadaqat Khan Fakku, president of the Urdu-Speaking Youth Rehabilitation Movement Bangladesh (USYRMB), said the residents of camps across Mirpur are facing the threat of eviction and are being intimidated by various parties.

“City Corporation authorities want to evict the residents of camps in the name of freeing the road of illegal constructions. However, they have not given any direction to rehabilitate us. Where shall we go?” he said.

He also mentioned that they had faced similar hazard in the past and nobody paid heed to their cries then either. “On more than one occasion we were evicted and forced to seek shelter in already crowded camps,” he said.

“I urge the authorities to ensure our proper rehabilitation before anything else,” Sadaqat Khan pleaded.

However, the High Court bench of Justice M Enayetur Rahim and Justice Md Khairul Alam on September 9 issued an order to maintain the status quo over for two months of Bihari residents from Mirpur Section 11 in Dhaka. A rule was also issued to 24 respondents, including the National Housing Authority and the DNCC.

Camp residents are still unsure what will happen once the period is over.

“We can’t buy a piece of land. We don’t have a home anywhere...we aren’t demanding anything unjust but only the preservation of our rights to live as citizens of Bangladesh,” said Liton, a resident of ADC Bihari camp.

“Nobody talks about us. If one of us wants to legally buy a piece of land for a better living, he is denied because of the tag ‘Bihari’,” he added.

Liton went on saying, “There has been an influx of thousands of Rohingyas just a few years ago in Cox’s Bazar. They’ve been provided with a lot more facilities than us. But we’ve been stranded here for 46 years, yet we’re living in dire conditions.”

Maksud Khan, a resident of Non-local Bihari camp at Mirpur-11, said there has been little to no development of their living conditions.

“It’s the fate of every stranded Bihari...we too are the citizens of Bangladesh. I myself was born here. Prime Minister Sheikh Hasina herself has assured us that our rights will be preserved but we haven’t seen better days yet,” he said.

The education as well as recreational facilities for young Bihari children are scarce, Maksud told UNB.

“With the help of some NGOs, schools were opened but due to lack of financial support we were forced to shut them down,” he said, adding that there are no field left for the kids to play.

A report titled ‘An Analysis of the National Budget for FY2019-20’ by the Centre for Policy Dialogue (CPD) highlighted that no allotment was made for the rehabilitation of Bihari community in the national budget for 2019-20 financial year.

The main income sources for any able Bihari are now small business and small-time jobs while Benarasi industry is slowly dying.

“Very few are interested to take on their ancestral profession of weaving Benarasi and learning the art of Karchupi,” said one of the residents of Football Ground Bihari camp.

Md Selim, another resident of the camp area, said most Biharis are not allowed to have passports despite having NID cards and the right to vote.

“If I use Bihari camp as my residence when applying for a passport, it’ll surely be rejected on the basis of not having a ‘permanent’ address,” he said.

DNCC Mayor Atiqul Islam told UNB that illegal buildings that are blocking roads and footpaths in Mirpur and other areas of DNCC will be evicted.

“If there’re illegal establishments in that area which are disrupting people's movement, they’ll be evicted for the sake of the citizens,” he told UNB.

However, he assured that those who are not occupying the roads illegally will not be evicted or displaced.