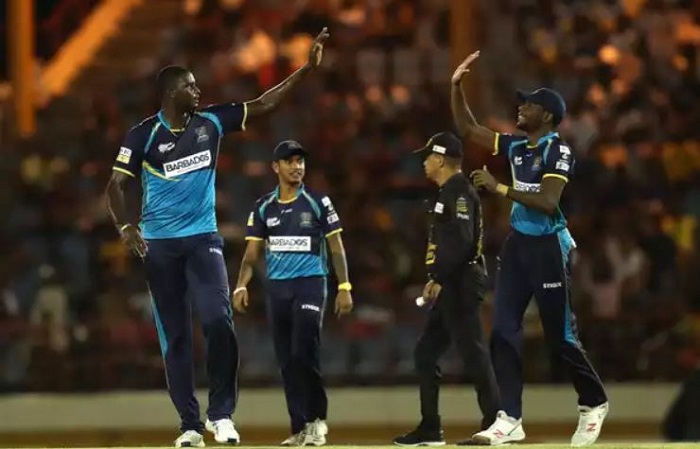 Barbados Tridents put up a clinical show with both bat and ball to crush St Lucia Zouks in a one-sided encounter at St Lucia on Friday (September 20).

Chasing 173, the home side had a miserable outing with the bat and were bowled out for just 101 with 31 balls to spare. Zouks lost a wicket each in the first three overs of the chase and never managed to recover, resulting in the massive loss.

Debutant Joshua Bishop conceded two boundaries to Rahkeem Cornwall off the first two deliveries before the bowler got his revenge with his first CPL wicket. He could have had two in two had Ashley Nurse held onto the outside edge at slip. Colin Ingram though, didn't make use of the reprieve and fell in the very next over as he hit one straight to backward point. And then a run out in the third over reduced them to 15/3 following which Colin de Grandhomme and Andre Fletcher employed an aggressive approach in an attempt to bail their side out of the mess.

The counterattack didn't last long though as Jason Holder disturbed Fletcher's stumps with a slower delivery. Sandeep Lamichhane, Raymon Reifer and Josh Lalor also joined in the act post the PowerPlay as the wickets kept tumbling. Had it not been for a quickfire 21-ball 31 from Hardus Viljoen, the home side wouldn't have even reached three figures in the end.

Earlier in the evening, another debutant delivered for Tallawahs as opener Justin Greaves hit a measured 45-ball 57 to help this side post 172 on the board. Greaves and Johnson Charles took 21 off the third over of the innings to get going and in the very next over, the debutant cracked back-to-back boundaries as the Tallawahs posted 52 in the first five overs. Once Viljoen was introduced into the attack, Greaves closed out the PowerPlay with a four and a six to extend his side's dominance.

Even the introduction of the legspinner Fawad Ahmed didn't stop the flow of boundaries before Obed McCoy finally ended the partnership. A tight eighth over bowled by Darren Sammy which was followed by three dot balls in the following over led to Charles mistiming one to get caught at long on. Zouks then kept piling on the pressure with more tight overs as the Tallawahs went through a period where they didn't find the boundary for 46 deliveries. In that phase, they also lost half-centurion Greaves.

The drought finally came to an end when Jonathan Carter hit three sixes in the space of five deliveries to provide some much-needed momentum. The final five overs were action-packed as the Tallawahs not only scored 57 runs but also lost four wickets to eventually end up a total that proved to be more than just competitive.