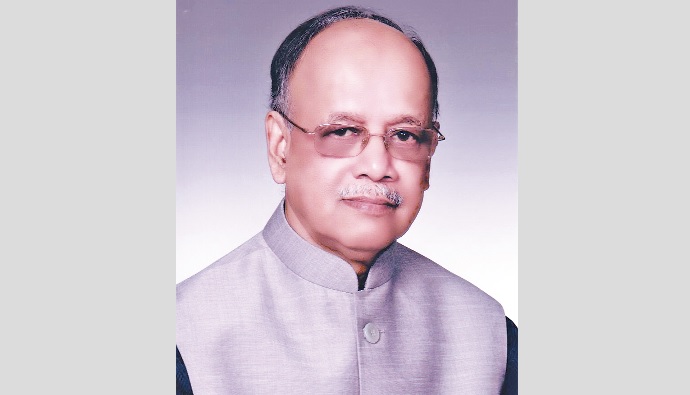 Whenever there is a possibility of Bangladesh’s Prime Minister meeting her Indian counterpart, whether it is across the border, in Bangladesh or in a third venue, peace-loving people on both sides of the border  and the media give it top priority and expect the most positive outcome of these visits or talks between the Prime Ministers of both countries. Actually hype is created and the mercury of the expectation amongst the people of both countries just shoots up. 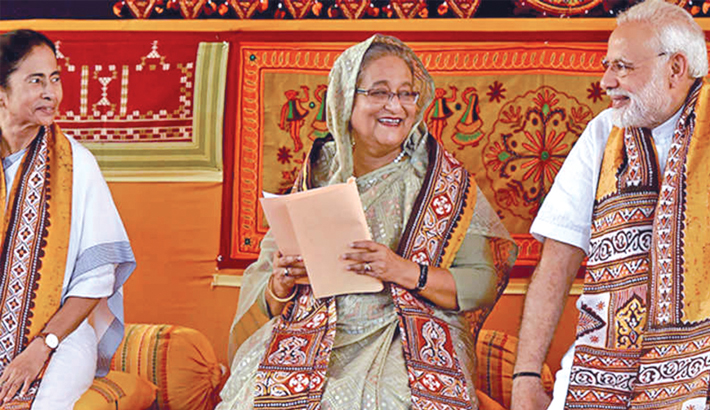 Bangladesh’s Prime Minister Sheikh Hasina left Bangladesh on Friday evening to attend the UN General Assembly’s 74th annual general session. During her visit to New York she is expected to meet India’s Prime Minister Narendra Modi and discuss important bilateral issues. This meeting is perceived to be very important before her official visit to New Delhi in the first week of October.

India is surrounded on all sides by countries which once were part of the British India, excepting Nepal and Bhutan. The British (actually the East India Company) tried unsuccessfully to occupy Nepal a number of times but failed and finally, in 1816, a treaty was signed and peace was established in Nepal though it had to cede some parts of its territory to the British East India Company. The British never tried to occupy Bhutan but provided protection to the hermit Kingdom. However, the current day Pakistan, Sri Lanka, Bangladesh, Myanmar (India shares a patch of border with Myanmar) all were part of the British Empire before 1947. Of these Pakistan was carved out of the greater India.

In 1971, Bangladesh broke up with Pakistan and, after a bloody war of independence, emerged as an independent country. During the nine-month Liberation War of Bangladesh the support of the people of India and its government was total; sacrifices made by them unprecedented and in the final phase of the war Indian soldiers shed blood with those of our freedom fighters. Actual number of Indian soldiers killed in the war was never revealed officially but from published unofficial sources it could be around six thousand.

The relationship of India with its immediate neighbours, especially with Pakistan and Nepal, has not always been so good and with Pakistan it has fought four wars, winning all of them. Even today India fights a protracted war with Pakistan over Kashmir, causing loss of life on both sides of the border and there is no respite in sight. Pakistan actually fights a proxy war with India over Kashmir through Pakistan trained cross border militants. That is what international observers and media reveal.

In 2015, India and Nepal entered an impasse due to an undeclared economic blockade imposed by India on the Indo-Nepalese border restricting movement of goods and commodities between the two countries, especially petroleum products to Nepal. This resulted in Nepal getting closer to China which was not necessarily in India’s favour for strategic reasons.

Though Sri Lanka is an island, the relationship between India and Sri Lanka could have been better, resulting in a very strong presence of China in Sri Lanka notwithstanding the fact that Sri Lanka is located in a very strategic location in the India Ocean. Sri Lanka is also situated on one of the busiest trade routes that connects East with West.

Coming to India’s relationship with Bangladesh, for historical and strategic reasons it can be nothing but warm and, needless to say, not only do both of the countries gain from such warmth, but the gain for India is more than that of Bangladesh for two very important reasons – security and trade. Though both the countries have always enjoyed a very close and warm relationship, often signs of tension and cracks become visible due to political rhetoric by politicians on both sides of the border.

From 1972 to the murder of the Father of the Nation Bangabandhu Sheikh Mujibur Rahman on 15 August 1975, the relationship between the two countries reached a very high level. Then came the military rule of General Zia and his successor General Ershad, followed by that of General Zia’s widow. As all three were politically bankrupt, they thrived on anti-Indian rhetoric for the next twenty-one years. Zia even used the state machinery to provide sanctuary to North East Indian secessionists inside Bangladesh and he was greatly helped by Pakistan’s infamous military intelligence ISI.

After 1991 when Zia’s widow formed the government, the relationship between the two countries took a nose dive. One of Begum Zia’s most powerful ministers audaciously announced in the national parliament that it was the moral duty of the Bangladesh government to help the North East Indian secessionists as India did to Bangladesh freedom fighters in 1971. He not only wanted Bangladesh to be an accessory in creating unrest in India, as per the desire of Pakistan’s ISI, but also compared our Liberation War to a secessionist movement. The leaders of the terrorist organisation ULFA found a safe haven in Dhaka with the help of Begum Zia’s government. During her second tenure (2001-2006), things deteriorated further when her elder son Tarique Rahman with the help of a section of Bangladesh’s state machinery opened routes for safe supply of arms through Bangladesh for use of the secessionists.

When Sheikh Hasina formed her government in 1996, things began to change. She began uprooting the nexus of secessionists from Bangladesh soil. As the first tenure of Sheikh Hasina’s rule was devoted to putting Bangladesh on the track of development and good governance and the trial of the killers of her father Bangabandhu Sheikh Mujibur Rahman, making the remote seven states of India in the north east safer for its inhabitants was always on her agenda. But unfortunately when her party Awami League could not win the election of 2001, things vis-à-vis the security of North East Indian states again went back to square one. But again when Sheikh Hasina formed government after winning a landslide victory in 2008, the relationship between the two countries scaled new heights.

During the first tenure of Sheikh Hasina’s government, one of the most remarkable achievements was signing the Ganges water sharing accord, a problem that had been hurting the ecological balance of Bangladesh due to an inequitable share of Ganges water. This would not have been possible if the then Indian government of Deve Gowda had not taken a pragmatic approach to solving the problem.

However, many of the long outstanding problems that had existed since the partition of India in 1947 were solved during the reign of current Indian Prime Minister Narendra Modi, the most important of these being strengthening the connectivity between the two countries through resuming long suspended rail and waterway links. The exchange of enclaves and the long standing border disputes were also solved and the Indian Parliament showed a rare gesture of goodwill when both houses of the Indian Parliament - Lok Sabha and Rajya Sabha - unanimously voted to ratify the Mujib-Indira accord of 1974 agreeing to exchange adversely located enclaves and demark the boundaries.

One problem still remains a nagging issue, the Teesta water sharing issue, and the Indian Prime Minister, time and again have clearly indicated that he hopes that it will also be solved during his tenure as Indian Prime Minister. Only Paschimbanga’s Chief Minister Mamata Banerjee has to be convinced. India works on a federal system and the centre usually does not take any decision bypassing the concerned state governments.

On the economic front, exports to India of Bangladeshi products have increased though still the trade imbalance between the two countries is quite significant, going in favour of India. This year Bangladesh’s exports to India are expected to reach one billion US dollar. Bangladesh has agreed to allow transit and transhipment facilities to India using Bangladesh’s port facilities though still the full potential is to be used by India. One of the reasons identified by analysts is that Indian shippers are not aware of the existence of these facilities. However, the State of Tripura has been one of the biggest beneficiaries of this facility. To enhance the usage of the available facilities there has to be more promotion in India done both by Bangladesh and India and at the same time improve the total infrastructure inside Bangladesh, especially its port facilities and road and rail links. The number of Bangladeshis travelling to India for different purposes from tourism and medical checkups and business have increased manifold. Dhaka houses India’s largest visa processing centres in the world and approximately 6,000 thousand visas are processed in this and other visa centres inside Bangladesh. If every person travels once a year and spends on an average 500 US dollars each the total amount of such money pumped into the Indian economy would be approximately one billion dollar plus. That is a huge amount of money by any standard.

In the neighbouring city of Kolkata of Paschimbanga on any given day a few hundred thousand Bangladeshis can be found either shopping, taking a vacation or visiting relatives and friends. During the Eid festivals, Puja or on New Years, the number explodes. Hospitals in Chennai, Bangalore, Delhi, Hyderabad and Kolkata are full of Bangladeshi patients. Many Indian doctors serve in Bangladeshi hospitals. According to official estimates about five hundred thousand Indians work in Bangladesh’s different sectors, which include textile, readymade garments, IT, pharmaceuticals and in service providing business that ranges from restaurants to beauty parlours. As we go along, many more such opportunities will emerge which will benefit both countries.

When the Prime Ministers meet, they should be discussing building newer steps on the foundation of friendship that has already been built and pledge to curb political rhetoric that damages the warmth of the relationship between the two countries. It will be more to India’s benefit if they can win the hearts of people of Bangladesh. But in the end it will have to be a win-win situation for both the countries remembering the fact that Bangladesh is not only a natural ally but also a strategic ally of India and the alliance should always depend on the respect for sovereignty and independence of both countries and it should be remembered that both the countries are emerging as economic powers in the twenty first century. At the end, synergy should be the outcome of the alliance between Bangladesh and India.