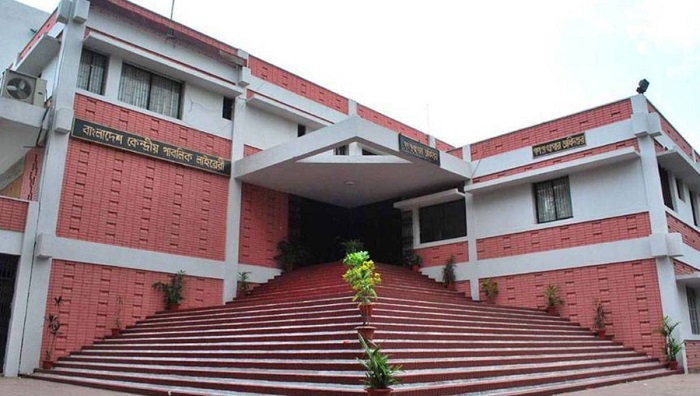 The government has taken plans to turn entire areas from Shahbagh to Dhaka Medical College Hospital (DMCH) into an aesthetic look.

According to the plan, the four major buildings and structures—the National Museum, the Public Library, the Teacher-Student Centre (TSC) of Dhaka University and the Dhaka Medical College Hospital—will be reconstructed to eye-catching designs soon.

About the development of TSC, she said there were only 4,000-5,000 students of the university when the TSC was constructed in the 1960s. But the number of its students and teachers is now over 40,000, which require large space and facilities.

Mentioning that, TSC auditorium and dining cafeteria are decades old, Sheikh Hasina said the government will reconstruct the TSC so that new TSC complex can accommodate a huge number of the teachers and students, offices of various cultural and socio-political associations. An international standard auditorium will also be built in the complex.

Sheikh Hasina said the plan has already been prepared to develop the TSC complex.

About the Public Library, the Prime Minister said the library will be made very eye-catching one maintaining an international standard in the construction of its structures.

The public library will be double in size to accommodate the larger number of readers and researchers. Those who will go there can also enjoy the aesthetic beauty of the library complex. The area surrounds a pond there will turn into a beautiful place for the readers to pass their leisure time, she added.

Over the National Museum, she mentioned the plan and design over the museum have already been prepared to construct it a new giving a fresh aesthetic view.

About the DMCH, the Prime Minister said the hospital will be reconstructed so that it can render services to 4,000-5,000 patients at a time.

The DMCH will be developed with modern service facilities and medical equipment, she said.

The Prime Minister said the metro rail will be made soundproof from Shahbagh-TSC-Doel Chattar for the sake of keeping congenial atmosphere for the education on the DU campus.

She said the students of the university have nothing to be worried as the metro rail will not hamper the environment of their education.

Referring to protest of a portion of the students against the construction of metro rail route and its station on the DU campus, Sheikh Hasina said she herself fixed the metro rail route considering the welfare of the people from all classes amid many barriers.

The Prime Minister said she fixed the Shahbagh-TSC-Doel Chattar route for the metro rail considering the wellbeing of the students and patients alongside the common people.

It’ll be computerized and latest model electronic train, which will automatically have a stoppage in a very station, she added.

Sheikh Hasina said a large international standard platform will be constructed in TSC area considering the movement of huge number of students.

The government will also construct a large underpass in front of the Bangla Academy considering the movement of the students and the Ekushey Book Fair, she said.

The DU students will largely be benefited due to Mass Rapid Transit (MRT), said the Prime Minister.

She said the entire Dhaka city will be brought under metro rail network by constructing underground rail (tube) and elevated rail in various places.

She said the government will also construct elevated ring road surrounding the Dhaka city to facilitate the movement of the city dwellers.

The Prime Minister was talking to senior leaders of Bangladesh Chhatra League (BCL), the student of Bangladesh Awami League on Thursday night.

The BCL leaders, led by its new acting president Al-Nahean Khan Joy and new acting general secretary Lekhak Bhattacharjee, met Sheikh Hasina, who is the organizational guardian of the BCL.